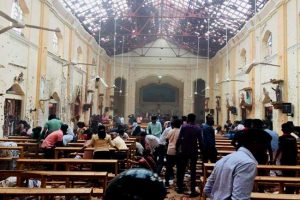 The police have dispatched units to the two locations for further investigations.

Reportedly, over 50 persons are confirmed dead with many more hospitalized following the explosion.

According to reports several other churches in close proximity to the two churches have been closed off by police, the police have reported that Colombo has been placed on high alert.

March 21, 2020 byTSM Web Desk No Comments
In view of the curfew which has been imposed, the Acting Inspector General of Police has assured that air tickets could be used in lieu of a curfew pass for the passengers as well as the vehicle and d

Justice Minister refuses to give special treatment to protesting inmates

August 14, 2018 byMalik No Comments
In response to the demands made by a group of female inmates at the Welikada Remand Prison, Justice Minister Thalatha Athukorala said the legal process will take place at its own pace