Playing in his fourth major final, the 27-year-old won his first Slam silverware with a comeback as methodical as his rise to this career-defining moment.

Only the second Austrian 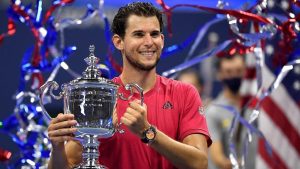 In one of the greatest fight-backs in world tennis in recent time, Dominic Thiem beat Alexander Zverev to win US Open men’s singles trophy on Sunday (13) at New York

“Dominic Thiem defeated Alexander Zverev in an epic five-set match … to win the men’s singles title at the 2020 US Open. It was Thiem’s first Grand Slam title, and he becomes the first player in the Open Era to rally from two sets down in a US Open final. Thiem is also the first player to capture a Grand Slam title from two sets down since Gaston Gaudio at 2004 French Open,” said CBS Sports.

For the first time in six years, there was a first-time Grand Slam champion at the US Open.

Thiem joins Thomas Muster (1995 French Open) as the only Austrian men to win a Grand Slam championship. Prior to the US Open win, Thiem had lost his three other Grand Slam finals appearances, with the most recent loss to Novak Djokovic in five-sets at this year’s Australian Open.

In front of a noticeably quiet, fan-less crowd at Arthur Ashe Stadium in Flushing Meadows, New York, the pair played for four hours with both feeling the effects on their legs toward the end. Both Thiem and Zverev are known for their aggressive baseline playing, and near the end of the match, the pair continued to battle it out in long, gruelling baseline rallies.

With Zverev serving for the match in the fifth set at 5-3, Thiem broke at 40-30 and followed it up with three exceptional points, including back-to-back forehand winners to level the set at five apiece.

Both served for match but couldn’t close

Usopen.org said both men served for the match in the fifth set, Zverev at 5-3 and Thiem at 6-5, but neither came close to ending it.

What started as a Zverev rout was ultimately decided by the finest of margins, 8-6 in the fifth-set tie-breaker, with each set more competitive than the one preceding it. There were four breaks of serve in the final five games of the match, and 15 in total, reported US Open official website on the marathon final.

“It was tough to stay there and to still believe, but I did,” Thiem said in his post-match press conference. “It’s a Slam final…the belief was always there.”

The No. 2 seed was the favourite in Arthur Ashe Stadium, a new proposition for him at this stage, but he quickly became a long-shot as Zverev raced to a 6-2, 5-1 lead in under an hour. The German was four games from the title, up a break at 2-1 in the third, when Thiem found traction with his biting ground game.

His comeback continued to pick up steam until late in the fifth, when Zverev made his move. But Thiem fought back from the brink a second time, breaking to stay alive and then fighting through cramps to will himself to the biggest win of his career. In the breaker, he won bruising rallies of 13 and 11 balls, and roped a forehand winner at 6-all to bring up his third and final match point.

The Austrian is the first player in the Open era to win from two sets down in a US Open final.