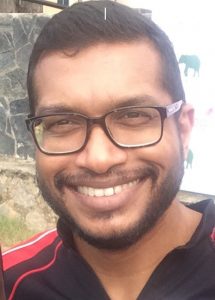 Shanaka Amarasinghe reports exclusively to The Morning from Japan

(This report was filed after three games on Saturday, 12 October 2019)

NZ vs. Italy (cancelled due to typhoon Hagibis)

England vs. Francs (cancelled due to typhoon Hagibis)

Namibia vs. Canada (cancelled due to typhoon Hagibis) 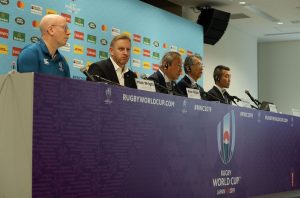 On Friday, 10 October after extensive evaluation, World Rugby and the Japan Rugby 2019 Organising Committee have announced an update regarding the predicted impact of Typhoon Hagibis on this weekend’s Rugby World Cup 2019 pool matches. This includes the decision to cancel matches on safety grounds

As I write this, typhoon Hagibis is lashing its fury upon much of the South Eastern coast of Japan. Tokyo, Yokohama, and Shizuoka have been severely affected and reservoirs are being opened with flood warnings imminent. It is the worst storm to hit Japan in nearly 60 years, that it almost seems a privilege to be here during these turbulent times.

To add to the disruption an earthquake measuring 5.7 in magnitude in Richter scale has just been reported from Chiba, just outside Tokyo proper.

Trains have been cancelled all of today, Saturday 12 October, and will be for most of Sunday, 13 October. Flights have been grounded and the usually busy intersections of Tokyo have been deserted. In Kyoto, where I had planned to be in preparation for travelling to the All Blacks game scheduled for Saturday, the weather is bad, but the rain is not torrential and the winds are not harsh, nothing to compare with the nearly 200km/h gusts that have been reported from the centre of the storm. At the time of writing, one person has been confirmed dead, while the damage and injury toll have not been released as yet.

In the midst of all this, there is the small matter of the Rugby World Cup to be played. In the only game to take place on Saturday, a 14-man Ireland dispensed Samoa 47-5 with a limp to go top of Group ‘A’, at least until Scotland and Japan play each other, if they do. Ireland have now played all their games and are on 16 points. Despite the red-card to Bundee Aki, they played with some adventure and accuracy against a team that really didn’t test them. The result would have pleased Joe Schmidt and the Irish fans, even though Aki’s absence for probably the remainder of the tournament, will be a midfield blow for them.

What this means for the group is that Ireland are in pole position for the moment. By the end of the day today, Sunday, that may all have changed. Japan are currently two points behind and have a game in hand against Scotland. If Japan win that game, they move to 18 points and top the group. If Japan win, both Ireland and Japan will advance, with the latter booking themselves a passage to play South Africa in the quarter-final. If the game is cancelled, which we will find out on Sunday, then both Scotland and Japan will be awarded two points each. Japan will advance as winner of the group by being level on points with Ireland and having beaten them in the group game. Scotland will be on a plane home.

If the game is played, and Scotland win, they could advance if they do not concede a losing bonus point to Japan. If Scotland win with a bonus and also concede a bonus, Scotland and Ireland will advance. If Scotland win but allow Japan to score four tries and finish within seven, then Ireland and Japan will advance. For Scotland to go through, they absolutely must win, and win convincingly. The permutations are intriguing, which is why it is almost imperative the game should go ahead.

The other team deprived of a mathematical chance of reaching the quarters are Italy. Sergio Parisse, the long-serving, colossus of Azurri rugby, has been deprived of his swansong, and an opportunity to pit himself against the Kieran Read and Ardie Savea. The man is gutted, as am I, at the thought of never seeing him play. Parisse has gone on record stating that if it was the All Blacks that needed the win, the game would have gone ahead. Many find it impossible to disagree with the Italian captain.

England and France have also had a game cancelled. However, both teams were through to the quarters already and will probably be happy that they don’t have to smash each other for bragging rights. France will play Wales and Australia will face England. Playing this match will be unlikely to change the fortunes of both teams massively and they have flown under the radar in terms of their opposition to the cancellation.

The Scots have –understandably– been less obliging. They have threatened legal action against World Rugby, and many quarters, including disgruntled fans, have accused the governing body of less than optimal management. Given that one game has already gone ahead on the day that two other matches were cancelled, the practical issue of shifting venues and closed-door stadia must surely be discussed. As must the issue of postponement, given that Hagibis was expected to have only a 24 hour pass through. The jury is still out, as the damage from the storm has not yet been assessed. Bullet trains have not left their stables and transport is bound to be a nightmare, prompting safety concerns if the matches did go ahead and bloody-minded fans were going to the games However, Japan being the host, and the fact that they stand to gain the most from any cancellations, have left a bad taste in the mouth.

Steven Hansen, called the decision to cancel a ‘no brainer’. Not many agree with him, and the Scottish Union is bringing all manner of pressure to insist on the Japan game going ahead. Unfortunately, most of the talk this weekend and since Thursday, have centred around matters off the field. Opinions have been divided on social media and while some support WR, even those that do admit that planning could probably have been better in terms of alternative venues and scheduling. The truth is probably that WR is beholden to tv companies whose unforgiving schedules do not entertain force majeure.

The credibility of the tournament is at stake, and I certainly wouldn’t want to be in World Rugby’s shoes right now. Once the storm –literally– has passed, there will be much metaphorical debris, for World Rugby to sweep up. Hopefully, not under the carpet.

February 21, 2020 byRevatha No Comments
A bewitching spell of wrist spin from Poonam Yadav sank Australia on the opening night of the T20 World Cup in Sydney

Angelo Mathews has expressed strong resentment at being made a “scapegoat for the dismal performances … at the Asia Cup”, after he was sacked as captain on Sunday. In a letter to SLC, he has even floated the idea of retiring from ODI and T20 cricket. On Friday, Mathews had met with Sri[…]