Unbeaten India Under-19 beat Bangladesh Under-19 by two runs and entered the final of the 5th Under-19 Asia Cup conduct by the Asian Cricket Council, at the Shre Bangla National Stadium, Mirpur on Wednesday, 3 October.

India U-19 won the toss and elected to bat. They were bowled out for 172 runs in 49.3 overs. Yashasvi Jaiswal scored 37 runs and Anuj Rawat scored 35. Jaiswal and Rawat made 66 runs or the second-wicket. Sameer Choudhary (33 n.o.) and Ayush Badoni (28) helped build their innings. Shoriful Islam took three wickets for 16 runs. Towhid Hridoi, Mrittunjoy Chowdhury and Rishad Hossain took two wickets each. 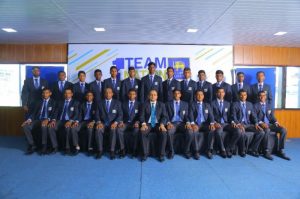 Unbeaten Sri Lanka Under-19 will meet Afghanistan in the semi-final of the Under-19 Asia Cup Cricket at Shere Bangla National Stadium Mirpur on Friday, 5 October.

Sri Lanka Under-19 advanced to the semis as group champion in the Group ‘B’. Sri Lanka beat Bangladesh, Hong Kong and Pakistan in the first-round.

Afghanistan advanced to the semi-final as runner-up in Group ‘A’. Afghanistan beat UAE and Nepal and they lost against India in the first-round.

Nipun Dhananjaya will lead Sri Lanka U-19 and Afghanistan U-19 will be led by Mohammad Ishaq Shirzad.

March 22, 2019 byRevatha No Comments
Having won the first game after a thrilling super over, South Africa will look to seal the series with a game to spare