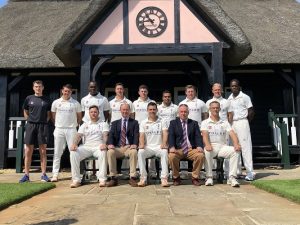 The UK Armed Forces Cricket Association (UKAFCA) arrived in Sri Lanka this week, as part of their tour of India and Sri Lanka, the British High Commission said in a press statement.

The team will tour Colombo, Dombagoda, Seenigama and Welisara, playing a series of friendly matches against teams in Sri Lanka.

A British High Commission spokesperson said ‘cricket embodies so many great things about the people to people links between the UK and Sri Lanka.
The values of cricket such as fair play, teamwork, commitment and responsibility are universal and apply to so many aspects of life.  We are really looking forward to the tour’.

Lankans. Today their empowerment programmes have expanded to reach over 31,000 beneficiaries from 400 villages across the country annually.

The UKAFCA is the governing body for cricket within the UK’s Armed Forces. Its main aim is to provide the Armed Forces’ cricketers, both men and women,
with the opportunity to achieve success at the highest level of the domestic game and to stretch their individual and collective ability.

October 24, 2018 byMalik No Comments
Cristiano Ronaldo marked his return to Old Trafford with a win as his Juventus side outclassed Manchester United to move five points clear at the top of Champions League Group H.

October 12, 2018 byRevatha No Comments
Pakistan couldn't make it in the first Test. Australia salvage a draw.