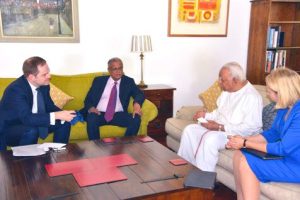 The UK has reiterated its commitment to reconciliation and accountability in Sri Lanka.

FCO Director for South Asia and Afghanistan Gareth Bayley expressed these views during a meeting with the Tamil National Alliance (TNA) leadership yesterday(13).

TNA leader R. Sampanthan recently said that the international community was duped into believing that a political solution could be reached following the defeat of the LTTE.

Sampanthan also called for an acceptable and satisfactory political solution be brought by the new government in terms of the 13th amendment.

Foreign Min. to hold talks with UN on peacekeeper ban

September 26, 2019 byTSM Web Desk No Comments
Secretary, Ministry of Foreign Affairs is scheduled to discuss the Sri Lanka peacekeepers suspension with the Under Secretary General of the UN Department of Peace Operations, on Friday(27), The Minis