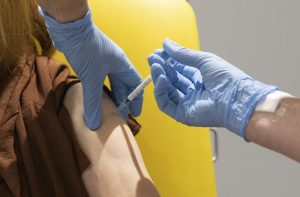 The vaccine, called AZD1222 and being developed by AstraZeneca and scientists at the United Kingdom’s University of Oxford, did not lead to any serious side effects, and elicited antibody and T-cell immune responses, according to trial results published in The Lancet medical journal on Monday.

In the research, scientists said they found their experimental COVID-19 vaccine produced a dual immune response in people aged 18 to 55 that lasted at least two months after they were immunised.

“We are seeing good immune response in almost everybody,” said Dr Adrian Hill, director of the Jenner Institute at Oxford University.

“What this vaccine does particularly well is trigger both arms of the immune system,” he said.

Hill said neutralising antibodies are produced – molecules that are key to blocking infection.

He said larger trials evaluating the vaccine’s effectiveness, involving about 10,000 people in the UK as well as participants in South Africa and Brazil are still under way. Another big trial is slated to start in the US soon, aiming to enrol about 30,000 people.

Head of emergencies at the World Health Organization praised the “good news” from the results shown in early trials, but warned “there’s a long way to go”.

“We now need to move into larger-scale real-world trials,” Dr Michael Ryan told reporters at a news conference in Geneva. “But it is good to see more data and more products moving into this very important phase of vaccine discovery.”

UK Prime Minister Boris Johnson, whose government has helped to fund the project, hailed the results as “very positive news”.

February 27, 2020 byTSM Web Desk No Comments
Saudi Arabia is stopping pilgrims entering the country to prevent the spread of coronavirus into the country.

May 20, 2019 byRandev No Comments
US President Donald Trump has issued a stern warning to Iran, suggesting it will be destroyed if a conflict breaks out between the two countries.