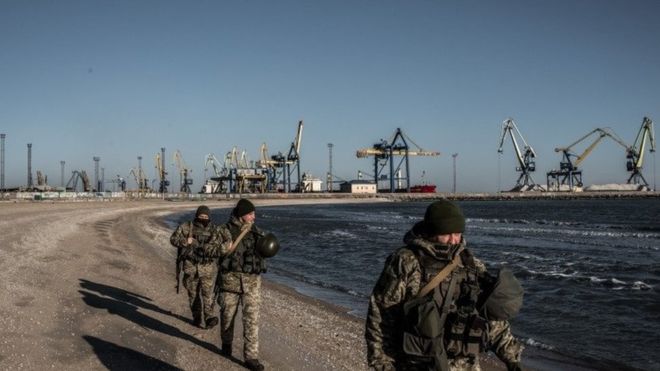 Ukraine will not allow Russian men aged 16-60 into the country during martial law, the president has said.

An exception would be made for “humanitarian cases” such as those travelling to funerals.

Martial law has been imposed in 10 regions including those bordering Russia until 26 December.

The move came amid fears of a Russian invasion after Russian forces seized three Ukrainian vessels and 24 sailors in the Black Sea at the weekend.

Ukraine said the incident was a flagrant violation of international law, while Russia says the vessels violated its territorial waters.

It is the most dangerous clash at sea off Crimea since Russia annexed the Ukrainian peninsula in March 2014.

President Petro Poroshenko tweeted (in Ukrainian) that the ban was designed to prevent the formation of “private armies” in Ukraine.

He was referring to Russian-backed separatists who formed units in April 2014 to fight Ukrainian government forces in eastern Ukraine.

The BBC’s Jonah Fisher in Kiev says the ban could have a devastating impact on cross-border travel as the holiday period approaches and could trigger reciprocal measures from Russia. (BBC)

MPs to vote on withdrawal bill in early June

May 15, 2019 byRandev No Comments
Theresa May is giving MPs another chance to vote on Brexit in early June - whether or not the government and Labour have reached a deal by then.

May 2, 2019 byRandev No Comments
The UN has designated the leader of a militant group behind a deadly bomb attack that brought India and Pakistan to the brink of war as a terrorist.