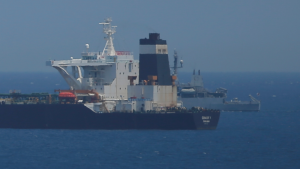 Britain’s seizure of an Iranian oil tanker off the coast of Gibraltar is unacceptable and tantamount to piracy, Defense Minister Amir Hatami has claimed.

In a speech broadcast live on state television on Monday, Hatami denounced the “threatening” actions taken by the Royal Marines, describing Britain’s detention of the Iranian vessel as similar to “maritime robbery.” He said that Iran would not tolerate such behavior.

On Thursday, British marines and Gibraltar police seized ‘Grace 1,’ an Iranian super tanker, off the southern coast of the Iberian Peninsula. Gibraltar’s Chief Minister Fabian Picardo claimed that the ship was transporting crude oil to Syria “in violation”of EU sanctions placed on Damascus. Tehran has denied the accusation, insisting that the ship’s cargo was not destined for Syria.

Iran’s Deputy Foreign Minister Seyyed Abbas Araqchi said on Sunday that the British had no legal right to seize the tanker, and that Tehran hopes to resolve the issue through legal means.

A top commander of Iran’s elite Islamic Revolutionary Guard Corps suggested a different response to the incident, calling for a British ship to be seized in retaliation if the Iranian vessel is not released.

October 11, 2019 byTSM Web Desk No Comments
Tehran has confirmed that an Iranian-owned oil tanker, the Sinopa, was attacked in the Red Sea, and that the mysterious strike caused an oil spill. The vessel was reportedly hit by two missiles.