UN concerned over impact of Chinese projects in Sri Lanka 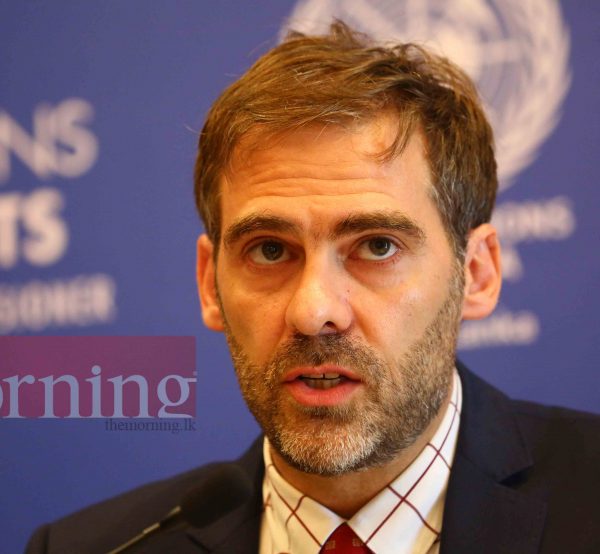 The United Nations (UN) today raised concerns over the impact some Chinese-funded projects are having on Sri Lanka.

The UN Independent Expert on Foreign Debt and Human Rights Juan Pablo Bohoslavsky, told reporters in Colombo today that he was concerned that there was no human right impact assessment of the major infrastructure projects carried out in Sri Lanka.

“Sri Lanka has been receiving international financial assistance from various international partners. China, Japan, India, the World Bank, and the Asian Development Bank. I am collecting information on the projects these institutions are financing or have financed. My message to them is that they must put in place a robust ex ante human right impact assessment so that local communities affected by these projects can express their views. International human rights law provides specific guidelines on how this must take place,” he said in response to a question raised by The Morning.

Meanwhile, in his end of mission statement issued today Bohoslavsky noted that after the end of war in 2009, large-scale infrastructure projects have flourished over the country.

Examples include the Colombo Outer Circular Expressway, Sampur power plant, the Hambantota Port and Hambantota Airport, all projects having been approved and launched in the late 2000s/early2010s. As of today, World Bank, Asian Development Bank, Japan, Korea, India, and China’s project loans alone account for a total $ 19.3 billion or 48% of the total loans taken by the State.

During his visit, he says, a number of concerns were expressed pertaining to whether and how the positive slipovers of these – and other – projects are capitalised by the country to boost inclusive development and address inequalities as well as to prevent their adverse consequences for human rights.

He said that all international lenders and donors he met in Colombo expressed concerns for the environmental and human rights implications of the projects they finance.

“However, none of them have in place a human rights impact assessment framework. Some mentioned ‘social’ and ‘gender’ impact evaluations conducted before taking the final decision on the projects but the legal standards against which the projects are assessed were not clear, and the result of these evaluations are not publicly available,” he said.

Therefore, he says he advised international financial partners to establish more robust frameworks to assess the human rights implications of the projects, covering both substantive and procedural rights.

April 10, 2020 byTSM Web Desk No Comments
The coronavirus pandemic will push the global economy into the deepest recession since the Great Depression, with the world's poorest countries suffering the most, the head of the International Moneta

Committee on non-banking financial sector: Report to be submitted today

July 7, 2020 byTSM Web Desk No Comments
The Central Bank committee appointed to look into the issues within the non-banking financial sector is expected to submit its report today (7).