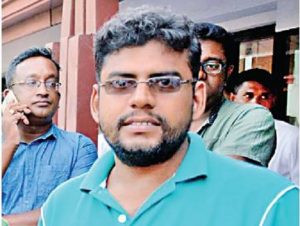 Freedom Now and Proskauer Rose LLP has filed a petition with the UN Working Group on Arbitrary Detention on behalf of Sri Lankan author Shakthika Sathkumara, a Press Statement said.

Freedom Now and Proskauer argue that Sri Lanka’s four month detention of Sathkumara and the ongoing legal proceedings against him violate the government’s obligations under the International Covenant on Civil and Political Rights and the Universal Declaration of Human Rights.

“The Sri Lankan government’s imprisonment of Shakthika Sathkumara for a short story is a clear violation of his right to freedom of expression; we are confident that the UN Working Group on Arbitrary Detention will come to the same conclusion,” said Freedom Now Executive Director Maran Turner.

“While we are grateful Sathkumara was finally released on bail, he still faces a lengthy prison sentence on spurious charges. Freedom Now calls on the Sri Lankan government to immediately drop all charges against Sathkumara and ensure he faces no further harassment.”

He is also a regular contributor to the literary supplements of various Sinhala-language newspapers. Since 2012, he has been employed by the Sri Lankan government and just prior to his arrest, he served as an Economic Development Officer at the Polgahawela Divisional Secretariat Office.

In February 2019, Sathkumara published a post-modern short story on his Facebook page entitled Ardha. In the subsequent days, an association of Buddhist monks filed a complaint with police alleging the story insulted and defamed Buddhism and Buddhists.

The complaint mentions the themes of homosexuality in Ardha and an allusion in the story to an instance of possible sexual abuse in a Buddhist temple. Sathkumara has maintained that he did not intend to insult Buddhism or any religious community by publishing Ardha.

Sathkumara was arrested on April 1, 2019 and charged under two domestic laws: Section 3(1) of Sri Lanka’s International Covenant on Civil and Political Rights Act which prohibits advocating religious hatred; and Section 291(B) of the Penal Code, which prohibits insult to religion. If convicted under both charges, he could face up to 12 years in prison. After his arrest, Sathkumara was held in pre-trial detention in an overcrowded prison until August 8, when he was released on bail. The conditions of his bail require him to report to the local police station several times a month.

The trial against Sathkumara has been subjected to repeated delays and has not moved past the pre-trial phase. Hearings in this case have been repeatedly delayed by the courts without reason—for example, Sathkumara filed an interlocutory petition to the Supreme Court alleging a violation of his constitutional rights, and while this petition was initially scheduled to be argued in September 2019, the Supreme Court, without express reason, rescheduled it to be argued in July 2020. Moreover, the indictment against him for the charges under the International Covenant on Civil and Political Rights Act has not yet been certified by the Sri Lankan Attorney General—a requirement for any charge brought under the Act. The next hearing at the trial-level is scheduled for December 10, when the Attorney General will determine whether to certify the indictment for the charges under the Act.

March 30, 2020 byTSM Web Desk No Comments
A batch of 132 quarantined persons were released today by the Sri Lanka Army.