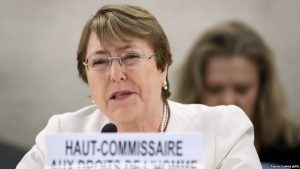 United Nations High Commissioner for Human Rights Michelle Bachelet today said she was not convinced  with the appointment of yet another Commission of Inquiry to address Sri Lanka’s human rights issues.

Bachelet’s comment comes after Foreign Minister Dinesh Gunewardana formally announced Sri Lanka’s decision to withdraw from co-sponsorship of Resolution 40/1 on ‘Promoting reconciliation, accountability and human rights in Sri Lanka’ which also incorporates and builds on preceding Resolutions 30/1 of October 2015 and 34/1 of March 2017.

As an alternative to the withdrawal, the Sri Lankan government proposed that it would appoint a Commission of Inquiry (COI) headed by a Justice of the Supreme Court, to review the reports of previous Sri Lankan COIs which investigated alleged violations of Human Rights and International Humanitarian Law (IHL), to assess the status of implementation of their recommendations and to propose deliverable measures to implement them keeping in line with the new Government’s policy.

Presenting a report on Sri Lanka to the UN Human Rights Council (UNHRC) in Geneva today(28), Bachelet said  the Domestic processes have consistently failed to deliver accountability in the past and that she was not convinced the appointment of yet another Commission of Inquiry will advance this agenda.

She said as a result, victims remain denied justice and Sri Lankans from all communities have no guarantee that past patterns of human rights violations will not recur.

“The State must work for all its people and the needs of all communities, particularly the minorities, must be acknowledged and addressed. I urge the Government to preserve and build upon the gains which have been made over the last few years. In particular, I encourage the Government to ensure the Office on Missing Persons and the Office of Reparations are provided with political and resource support. The families of missing persons from all communities deserve justice and redress.”

“Sri Lanka’s independent institutions, strengthened under the 19th Constitutional Amendment, are a key pillar in its democratic structure. And the space for civil society and independent media should be protected. I am therefore troubled by the recent trend towards moving civilian functions under the Ministry of Defence or retired military officers, and renewed reports of surveillance and harassment of human rights defenders, journalists and victims. The increasing levels of hate speech, and security and policy measures appear to be discriminately and disproportionately directed against minorities, both Tamil and Muslim.”

“The fundamental problem remains that Sri Lanka has still not addressed impunity for past violations, nor undertaken the security sector reforms needed to address their drivers and enablers.  Systemic barriers that continue to exist within the criminal justice system remain an impediment to real justice. ”

Bachelet urged the Council to remain alert to this situation in terms of prevention and to explore all possible avenues for advancing accountability.