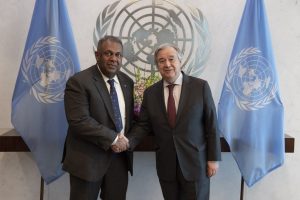 He stated this during a meeting held with Minister Mangala Samaraweera who was in New York.

Minister Samaraweera was representing Sri Lanka at the Financing for Development Forum of the UN Economic and Social Council held on 15-18 April 2019 at UN Headquarters in New York.

Guterres recalled his first visit to Sri Lanka in 1978 and was impressed by the peaceful resolution of the 50-day political turmoil last year (2018).

Disappearance of 11 youths – New twist in the case

October 27, 2019 byThe Sunday Morning No Comments
A former Sri Lanka Navy Commander has been named the 16th suspect in the high-profile Magistrate’s Court case over the disappearance of 11 youths, allegedly tortured in a secret cell at the

July 28, 2019 bythemorninglk No Comments
With the future of the proposed Millennium Challenge Corporation (MCC) Compact agreement between Sri Lanka and the US on the fence, US Ambassador to Sri Lanka Alaina B. Teplitz has sent an urgent lett