Private sector unions are up in arms against a proposal by Prime Minister Ranil Wickremesinghe to resume investing funds from the Employees Provident Fund (EPF) in the Colombo Stock Exchange (CSE).

Inter Company Employees’ Union (ICEU) Convener Wasantha Samarasinghe told The Sunday Morning that no politician had the right to touch EPF funds as they belonged to millions of private sector employees in the country.

“The fund is managed by the Monetary Board of the Central Bank of Sri Lanka (CBSL) and the Prime Minister had no right to take the decision and issue certain directives to the CBSL to invest EPF money in the stock market,” he said.

Last year, there was a proposal from Asian Development Bank (ADB) to resume investing EPF funds in the stock market, but as per a decision taken at a meeting held on 21 November 2018, it was reversed, Samarasinghe said.

However, at a meeting held with CBSL Governor Dr. Indrajit Coomaraswamy on 21 March 2019, the Governor had informed that the bank was advised to take steps to resume investing EPF money in the stock market.

The meeting was held between CBSL officials and trade unionists including Leslie Devendra, Wasantha Samarasinghe, and Palitha Athukorala. During the meeting, the Governor had said that approximately 8.5% of the EPF’s Rs. 2 trillion portfolio would be invested in the stock market.

The EPF was established under the Employees’ Provident Fund Act No. 15 of 1958 and is currently the largest social security scheme in Sri Lanka. With a current asset base of Rs. 1.665 trillion, the EPF provides some “peace of mind” to the employees of institutions and establishments of the private sector, state-sponsored corporations, statutory boards, and private business. The aim of the EPF is to assure financial stability to the employee in the winter of life and to reward the employee for his or her role in the economic growth of the country.

The EPF fund is usually invested in treasury bills and bonds, equity, corporate debentures, rupee securities, etc. Depending on the rate of return, an annual interest rate is declared and credited to the account.

According to the ICEU, at the end of last year, the EPF had a sum of Rs. 90.833 billion in shares in the stock market, but the market value of those shares was only Rs. 74.853 billion. As a result, the total capital loss of the investment was around Rs. 16.030 billion.

Samarasinghe further stressed that instead of investing in the stock market, the Government should have invested in treasury bonds (TB) which provide an interest of 11.5%.

“As of now, the total investment of EPF money was only 4.5% and now the Government is planning to invest an addition 4%, thereby totalling 8.5%,” he stressed.

In the annual report of the EPF for 2016, the losses incurred by the fund between 2015 and 2016 were mentioned under the Auditor General’s observations.

The recommendations of the Auditor General further noted that the losses incurred by investing in stocks resulted in a reduction in fund reserves. The report said that the reduction in stock value of six companies the fund had invested in over a long period of time amounted to Rs. 5.232 billion in losses to the fund in 2016.

Speaking to The Sunday Morning, UPFA MP Udaya Gammanpila said: “The Central Bank is the custodian of the EPF fund. The CBSL manages funds on behalf of millions of employees in the private sector in this country. So in the past, for the last 30 years, we have experience in investing EPF funds in the share market. Unfortunately, the EPF fund managers had abused the fund to benefit certain companies.

“Especially in cases where certain investors find it difficult to dispose of shares, these EPF fund managers come forward and purchase them. Similarly, when a company’s share issue was at risk of being undersubscribed, the EPF had come forward.

Explaining further, Gammanpila said: “The CBSL has breached the trust placed by the EPF contributors and as a result, they should not be allowed to make any risky investments. They should only stick to investments that have a fixed income yield in securities such as Government bonds and fixed deposits. Therefore in principle, we are against investing EPF funds in the share market. On the other hand, the Prime Minister has no authority to direct the CBSL Governor or Monetary Board on what to do with the EPF fund. The CBSL is an independent body.”

For instance, in the Bank of Ceylon Ordinance, there is a clause stating that the Minister may, from time to time, give general or special directives to the board, which the board is bound by.

However, there is no such provision in the Monetary Board Act which governs the CBSL.

Therefore, in his capacity as the Minister in charge of the subject of CBSL, the Prime Minister has no authority to give such a directive and the directives have no legal validity, he stressed.

In this backdrop, The Sunday Morning contacted the Prime Minister’s Office to ascertain if Wickremesinghe had taken a decision on the investment.

Secretary to the Prime Minister Saman Ekanayake denied the allegations and stated that Wickremesinghe had not taken a decision to invest EPF money in the share market.

Claiming that the allegations levelled against the Prime Minister were baseless, Ekanayake said that Wickremesinghe had not given such directives to the CBSL, neither verbally nor in writing. 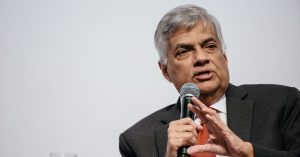 “The Prime Minister had only suggested it, but had not taken any decision,” he added.

Colombo Stock Exchange (CSE) Chairman Ray Abeywardena told The Sunday Morning that the CSE gladly welcomed PM Wickremesinghe’s comment as it was high time the captive funds came back to the market.

“I gladly welcome his statement. As you know, I’ve been lobbying fairly hard for this. In fact, at the capital market conference I was advocating that it was high time the captive funds came back to the market. I believe that consequent to that, there had been lots of lobbying. I welcome the PM’s statement that the EPF will be coming back to the market. We hope it will happen soon,” he said.

No. of non-contributing member accounts
14.3 million
85%

May 20, 2019 bythemorninglk No Comments
While Sri Lanka is yet to decriminalise homosexuality, the healthcare services and the Ministry of Home Affairs seem to be very accommodating of transgender persons.