UNP leadership issue to be resolved next Thursday 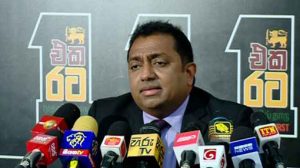 The final decision regarding the leadership of the UNP will be taken next Thursday, UNP General Secretary Akila Viraj Kariyawasam said.

Kariyawasam was speaking to reporters following today’s parliamentary group meeting which was held to discuss party matters including the leadership issue.

He said a proposal was brought forth that Speaker Karu Jayasuriya be given a leadership position in the alliance.

Kariyawasam further added that the majority were in consensus that Jayasuriya, Ranil Wickremesinghe and Sajith Premadasa should collectively spearhead the forthcoming election campaign.

March 24, 2020 byTSM Web Desk No Comments
The Tokyo 2020 Olympic and Paralympic Games have been postponed until next year because of the worldwide coronavirus pandemic.