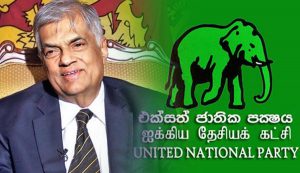 The United National Party (UNP) has informed the National Elections Commission (EC) that it will be contesting the General elections, UNP General Secretary Akila Viraj Kariyawasam told The Sunday Morning.

Kariyawasam has further informed the polls body that the UNP will contest in all 22 Districts under the ‘elephant symbol’.

This decision has been taken in the backdrop of a new UNP-led alliance, ‘Samagi Jana Balavegaya’ being formed to contest the forthcoming parliamentary polls.

The alliance was formed with the approval of the UNP Working Committee.

December 2, 2020 byNethmi Liyanapathirana No Comments
The Department of Meteorology forecasted that the depression area in the southeast Bay of Bengal has concentrated into a deep depression and is expected to develop into a cyclonic storm.

New programme to clean 103 rivers to commence in January: Minister