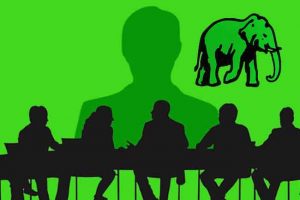 The UNP Working Committee (WC) which convened today(10) has not reached consensus over the name of the new UNP-led alliance and the proposed symbol.

The name of the proposed alliance is ‘Samagi Jana Balavegaya’ while the proposed symbol is a ‘yellow heart’.
Reportedly, a majority of the (WC) had proposed that the ‘elephant’ symbol be used for the new alliance.
Reliable sources told The Sunday Morning that the proposed alliance led by Opposition Leader Sajith Premadasa was finalized this morning and sent to the Elections Commission for registration.
Tweet
Share
Pin
Share14
14 Shares