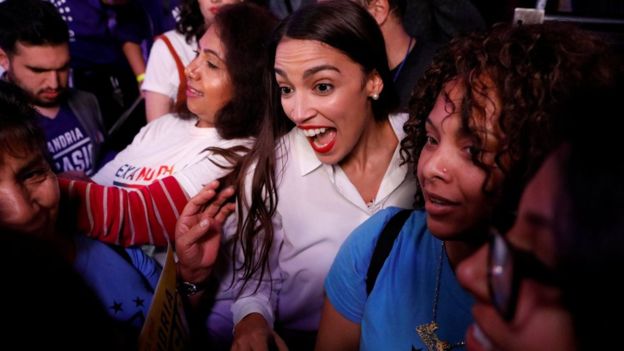 The US Democrats have taken control of the House of Representatives in the mid-term elections, dealing a serious blow to President Donald Trump.

Taking control of the lower chamber of Congress for the first time in eight years will enable Democrats to thwart the President’s agenda.

But Trump’s Republicans have retained control of the US Senate.

Tuesday’s vote was seen as a referendum on a polarising president, even though he is not up for re-election till 2020.

Female candidates stole the spotlight in the House in an election cycle that had been billed as the Year of the Woman.

The BBC’s US partner network CBS projects the Democrats will win the 23 seats they need to take over the lower chamber of Congress. Americans voted for all 435 seats in the House.

The Democrats can now launch investigations into Trump’s administration and business affairs, from tax returns to potential conflicts of interest, while blocking his legislative plans.

New York Democrat Alexandria Ocasio-Cortez is projected to become the youngest ever congresswoman, at 29 years old.

Democrats Ilhan OImar and Rashida Tlaib are also expected to make history in Minnesota and Michigan respectively as the first Muslim women elected to Congress.

Democrats Sharice Davids of Kansas and Debra Haaland from New Mexico are set to become the first Native American women elected to Congress.

Republicans may expand their majority in the upper chamber of Congress, where they currently hold sway by 51 seats to 49.

Democratic Senators Joe Manchin and Bob Menendez held on after tough campaigns in West Virginia and New Jersey respectively, but it was cold comfort.

Mitt Romney, the 2012 Republican presidential nominee, has won election to US Senate from Utah, as expected.

Democrats were always facing an uphill battle in the Senate this year because they were defending 26 seats, while just nine Republican seats were up for grabs.

President Trump was quick to celebrate his party’s gains.

It’s a tale of two chambers.

The door to a Democratic-controlled Senate slammed shut. Donald Trump will continue to have a Republican majority ready and willing to confirm his executive and judicial appointments. The only question now is the size of his party’s advantage.

In the House of Representatives, however, the story is different. The path of least resistance for Democrats to a majority in that chamber led through educated suburban districts that had long voted for Republicans, but contained voters that may have been uneasy with Donald Trump’s policies and rhetoric.

One by one, those districts were carried by the Democrats. In Virginia, Illinois and Florida, moderate Republicans lost. In places like Colorado, New Jersey, Kansas, Pennsylvania, Texas and New York, Democrats are poised for victory.

It won’t feel like the tsunami many on the left were hoping for, but a steadily rising tide is still lifting Democrats to enough victories to give them control of the House for the first time in eight years. With that comes the ability to stop the Trump legislative agenda in its tracks and puts some teeth in congressional oversight of his administration.

The partisan trenches in America are getting deeper. And after two years in the darkness, Democrats have a means to fight back.

Governors – who hold considerable power over the lives of their constituents and are influential in presidential elections – have been chosen in 36 out of 50 states.

In Florida, left-wing progressive Andrew Gillum has conceded after an ugly battle against a Trumpist conservative, Ron DeSantis.

Jared Polis is projected to win the Colorado gubernatorial race, becoming the first openly gay man to be a US governor.

New York Democratic Governor Andrew Cuomo – sometimes spoken of as a 2020 presidential contender – is expected to cruise to a third term.

Democratic candidate Stacey Abrams could become the first female African-American governor in the US if she can beat Republican opponent Brian Kemp after a bitter campaign. (BBC)

January 21, 2019 byRandev No Comments
US President Donald Trump has set out new plans on his Mexican wall project to try to end a partial government shutdown lasting more than four weeks.

North Korea has lashed out again at the US for not lifting sanctions against the country. The foreign ministry said it had made various goodwill gestures, and yet the US was still following an “outdated acting script” and jeopardising any moves towards denuclearisation. North Korea remains under a range of[…]