US files charges against China’s Huawei and CFO Meng Wanzhou 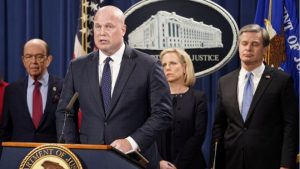 The US Justice Department has filed a host of criminal charges against Chinese telecoms giant Huawei and its chief financial officer, Meng Wanzhou.

Among the charges are accusations of bank and wire fraud, obstruction of justice and theft of technology from US company T Mobile.

Meng was arrested in Canada last month on a US request for allegedly evading sanctions on Iran.

The case has badly strained relations between China, Canada and the US.

Both Meng and Huawei deny the allegations.

What are the charges?

The indictment alleges Huawei misled the US and a global bank about its relationship with two subsidiaries, Huawei Device USA and Skycom Tech, to conduct business with Iran.

In all, the US has laid 23 charges against the company.

Several countries have raised security concerns about Huawei in recent months, with the US government encouraging companies and other nations not to buy Huawei products.

Huawei is one of the largest telecommunications equipment and services providers in the world, recently passing Apple to become the second-biggest smartphone maker after Samsung.

But the US and other Western nations have been concerned that the Chinese government could use Huawei’s technology to expand its spying ability, although the firm insists there is no government control.

The arrest of Meng, the daughter of Huawei’s founder, infuriated China.

She was arrested on 1 December in Canada’s western city of Vancouver at the request of the US.

The US charges come the day after Canada fired its ambassador to China, soon after he publicly said the US extradition request for Ms Meng was flawed.

Days after Meng’s arrest in December, China detained two Canadians – former diplomat Michael Kovrig and businessman Michael Spavor – in what some have seen as a tit-for-tat response.

He had received a 15-year prison term in November, but a court ruled this sentence was too lenient.

October 10, 2019 byTSM Web Desk No Comments
A gunman has killed two people in eastern Germany after attempting to enter a synagogue where dozens were observing a Jewish holiday.

April 23, 2019 byRandev No Comments
A powerful earthquake has struck the main Philippines island of Luzon, killing at least 11 people.