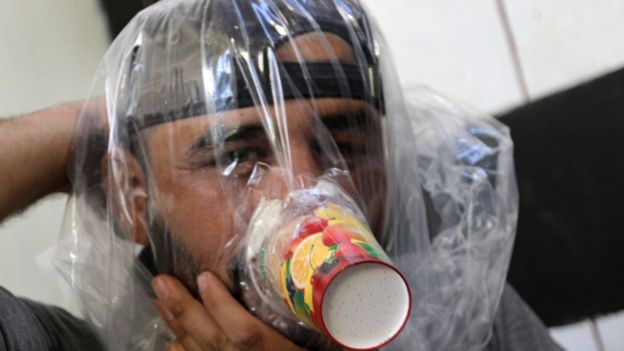 US ‘has seen evidence’ chemical weapons being prepared

The new US envoy for Syria has said there is “lots of evidence” that Syrian government forces are preparing to use chemical weapons in Idlib.

Jim Jeffrey said an anticipated offensive against the last major rebel-held area would be a “reckless escalation”, Reuters reported.

The Syrian government has repeatedly denied ever using chemical weapons.

Russian planes have bombed rebel areas in the north-western region as troops mass for the expected offensive.

It comes as a summit is due to take place in Iran on Friday between the leaders of Russia and Iran, which both support Syrian President Bashar al-Assad, and Turkey, which has backed some rebel factions.

The UN has warned of a humanitarian catastrophe if an all-out assault takes place and Turkey fears a new influx of refugees across its border.

“I am very sure that we have very, very good grounds to be making these warnings,” Jeffrey said in his first interview since being appointed.

“Any offensive is to us objectionable as a reckless escalation. There is lots of evidence that chemical weapons are being prepared.”

He did not give details of the evidence he was referring to.

The US state department warned on Monday that Washington would respond to any chemical attacks by the Syrian government or its allies.

Despite Syrian denials, experts from the UN and the Organisation for the Prohibition of Chemical Weapons (OPCW) have said they are confident government forces were behind an attack involving the nerve agent Sarin on a rebel-held town in southern Idlib in April 2017 that killed more than 80 people.

He said there was “a new commitment” by President Donald Trump to remain involved in Syria until the Islamic State group (IS) was defeated and to ensure that Iranian fighters – who are supporting the Syrian authorities in the conflict – leave the country.

Jeffrey said President Assad had “no future as a ruler” in Syria, but it was not Washington’s job to oust him. He said the US would work with Russia on a political transition.

“Right now (the Syrian government) is a cadaver sitting in rubble with just half the territory of Syria under regime control on a good day,” he added.

With rebel forces defeated in most of Syria, the offensive in the north-western province of Idlib could prove to be the last major battle of the seven-year civil war.

There are believed to be up to 30,000 rebel and jihadist fighters in Idlib.

The UN says the region is home to some 2.9 million people, including a million children. More than half of the civilians have already been displaced at least once from elsewhere in Syria and have nowhere left to go.

UN officials say as many as 800,000 people could be displaced and that the already high number of people in need of aid could increase dramatically. (BBC)

August 8, 2019 byTSM Web Desk No Comments
Tehran has hit out at Bahrain for hosting a “provocative” conference on Gulf maritime security and for its rhetoric accusing Iran of attacking tankers.

December 13, 2019 byTSM Web Desk No Comments
The Conservatives have won an overall majority in the general election, passing the 326-seat threshold with constituencies still to declare.