US imposes sanctions on Turkey over Syria attack 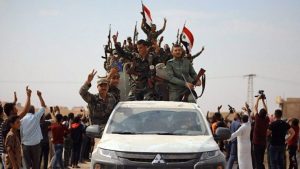 The US has imposed sanctions on Turkish ministries and senior government officials in response to the country’s military offensive in northern Syria.

Pence said he would travel to the region “as quickly as possible”.

The move comes after criticism of a US troop withdrawal from the region which some say gave Turkey a “green light”.

The Turkish offensive, which began last week, aims to push the Kurdish-led Syrian Democratic Forces (SDF) from the border region.

Turkey considers the biggest militia in the SDF a terrorist organisation.

Turkish forces also want to establish what their government describes as a “safe zone” in the area, to resettle up to two million Syrian refugees currently in Turkey.

Many of them are not Kurds and critics warn this could lead to ethnic cleansing of the local Kurdish population.

Kurdish-led forces have been a key ally of the US in the fight against the Islamic State (IS) group in Syria. They described the US withdrawal, which preceded Turkish action, as being a “stab in the back”.

There are fears the local destabilisation could risk a resurgence of the IS group, as thousands of former fighters and their relatives are being detained in northern Syria. Hundreds are said to have already escaped from one camp.

What are the US sanctions?

Action was taken against Turkey’s defence and energy ministries, as well as the ministers of defence, energy and interior, ,the US Treasury said in a statement. The move freezes their assets in the US and bans transactions with them that involve the US financial system.

“The Turkish government’s actions are endangering innocent civilians, and destabilizing the region, including undermining the campaign to defeat ISIS [Islamic State],” the statement added.

President Donald Trump has faced mounting pressure to take action against the US’s Nato partner, including from Republicans usually loyal to his administration.

In a statement posted on Twitter, President Trump also said he would raise tariffs on Turkish steel to 50% and “immediately stop” negotiations related to a “$100 billion trade deal” with Turkey.

“The United States and our partners have liberated 100 percent of ISIS’s ruthless territorial caliphate,” the statement said. “Turkey must not put these gains in jeopardy.”

Appearing alongside Mr Mnuchin on Monday, Vice-President Pence warned that the sanctions “will continue and will worsen unless and until Turkey embraces an immediate ceasefire, stops the violence and agrees to negotiate a long-term settlement of the issues along the border between Turkey and Syria”.

The vice-president also reiterated that the US “did not give a green light to Turkey to invade Syria”.

House Speaker Nancy Pelosi, who leads the Democrats, said on Twitter that the sanctions “fall very short of reversing the humanitarian disaster brought about by [the president’s] own erratic decision-making”.

In response, Turkey said it would examine its co-operation with the EU due to its “unlawful and biased” attitude. BBC