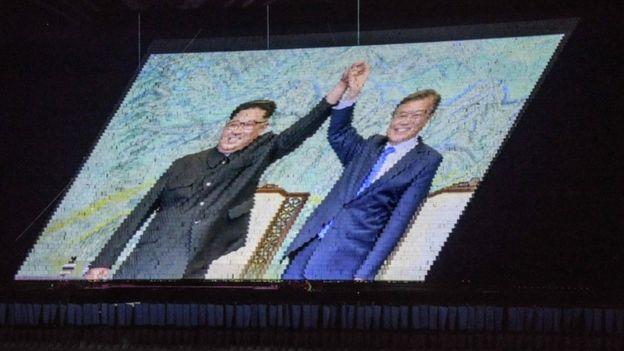 US ‘ready to restart negotiations’ with North Korea

US Secretary of State Mike Pompeo says he is ready to restart negotiations with Pyongyang, with the aim of denuclearising North Korea “by 2021”.

Discussions between the two sides had stalled following a broad-strokes agreement made earlier this year.

Kim “agreed on a way to achieve denuclearisation” on the Korean peninsula following the summit with his South Korean counterpart, Moon Jae-in.

Pompeo said it was “on the basis of these important commitments” that the US was “prepared to engage immediately in negotiations”.

In a statement, he said he had invited North Korean Foreign Minister Ri Yong-ho to meet him in New York next week, while invitations had been extended for a second meeting between North Korean and US representatives in Vienna, Austria.

“This will mark the beginning of negotiations to transform US-DPRK [North Korea] relations through the process of rapid denuclearisation of North Korea, to be completed by January 2021, as committed by Chairman Kim, and to construct a lasting and stable peace regime on the Korean Peninsula,” he said.

The January 2021 date is the most specific timeline an official on either side has put forward publicly so far.

What happened at the summit?

The main focus of the summit between Kim and Moon was the issue of denuclearisation.

Kim expressed a readiness to shut down the Yongbyon nuclear facility – where North Korea is believed to have produced the material used in its nuclear tests – if the US takes some reciprocal action.

The BBC’s Laura Bicker in Seoul says that is likely to be the US signing a peace treaty to formally end the Korean War.

But he went further on Tongchang-ri, saying the engine missile testing and launch facility would be permanently closed “in the presence of experts from relevant nations”. Our correspondent says that is a major step forward.

Satellite images suggest Tongchang-ri is in the process of being destroyed, she adds, but the declaration will allow inspectors to verify the process.

North Korea blew up its main nuclear testing site at Punggye-ri shortly before Kim’s meeting with US President Donald Trump in June.

On Thursday, the two leaders of North and South embarked on a trip to Mount Paektu which holds a central place in Korean mythology. The volcano is situated at the border between the North and China.

What does this mean for US?

Trump welcomed the agreements, which he said were “tremendous progress”, and was quick to tweet his applause for the Moon-Kim summit.

The US and North Korea held their own historic meeting in June when Trump and Kim agreed in broad terms to work towards denuclearisation.

Since then, however, there has been little progress, with no clear process nor timeline laid out, while an abruptly cancelled trip to Pyongyang by Pompeo in August led to speculation relations had soured somewhat.

Most observers warn that so far the North has taken no meaningful steps to end its controversial nuclear weapons programme and that this week’s summit might not be enough to convince them otherwise.

But Trump has remained confident of the North Koreans’ commitment, recently saying that he and Kim would “prove everyone wrong”, after he received an invitation from the North Korean leader for a second summit. Both sides say they are working on making that meeting happen. (BBC)

Trump threatens to pull US out of World Trade Organization

August 31, 2018 byMalik No Comments
President Donald Trump has threatened to withdraw the US from the World Trade Organization (WTO) if the body fails to change the way it treats America.

June 14, 2020 byTSM Web Desk No Comments
This is the first in a two-part series examining the escalating humanitarian crisis in Yemen.