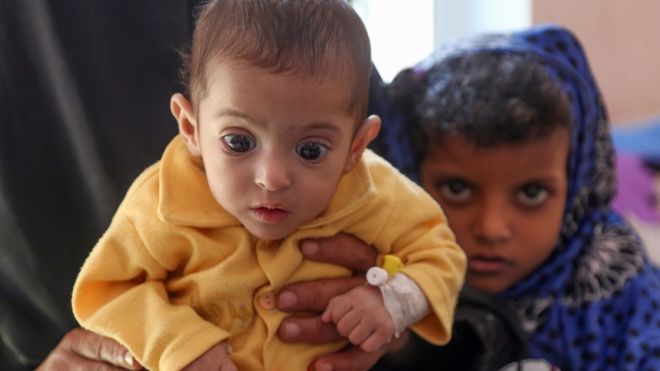 US Senate advances measure to end support for Saudi forces

The US Senate has advanced a measure to withdraw American support for a Saudi-led coalition fighting in Yemen.

In a blow to President Donald Trump, Senators voted 63-37 to take forward a motion on ending US support.

Secretary of State Mike Pompeo and Defence Secretary Jim Mattis had urged Senators not to back the motion, saying it would worsen the situation in Yemen.

The vote comes in the wake of the murder of Saudi journalist Jamal Khashoggi, a US resident.

Criticism of Saudi Arabia has grown since the prominent writer was killed while visiting the Saudi consulate in Istanbul in Turkey on 2 October.

The US Senators, who met in a closed session on relations with Saudi Arabia on Wednesday, also strongly criticised the non-appearance of the director of the CIA at their hearing.

Gina Haspel has heard a recording of Khashoggi’s murder provided by Turkey and has studied evidence in the case. One senator described her absence as a “cover-up”.

The Senate’s vote is seen as a rebuke to President Trump who has described Saudi Arabia as a vital ally and resisted calls for sanctions against the kingdom’s leadership.

The vote in the Senate means further debate on US support for Saudi Arabia is expected next week.

Correspondents say that even if the Senate ultimately passes the bipartisan resolution it has little chance of being approved by the House of Representatives.

What did the senators say?

Several emerged from Wednesday’s briefing expressing anger that their request to hear directly from Haspel – who has heard audio of the murder provided by Turkey – had been turned down.

Democratic Senator Bob Menendez said the Senate had been “stonewalled from hearing from the CIA director”.

“I have respects for the secretaries of state and defence but I don’t need them to characterise the information of the CIA and intelligence community, I need to hear it directly,” he added. “It’s time to send Saudi Arabia a message, both on its violation of human rights and the incredible humanitarian catastrophe it’s creating in Yemen.”

Republican Senator Bob Corker, who chairs the Senate Foreign Relations Committee, said it was apparent to everyone in the room that the crown prince had been responsible for Khashoggi’s death.

“We have a problem here. We understand that Saudi Arabia is an ally, of sorts, and a semi-important country. We also have a crown prince that’s out of control,” he said.

Another Republican Senator, Lindsey Graham, said he would be withholding his vote on any key issue until the CIA gave senators directly a briefing on the killing.

The BBC’s Barbara Plett Usher in Washington says opposition to the war in Yemen has gained momentum because of outrage at the administration’s response to the Khashoggi killing.

How did Mr Pompeo respond?

The secretary of state restated the White House’s view that “there is no direct reporting connecting the Saudi crown prince to the order to murder Jamal Khashoggi”.

The Saudis have blamed rogue intelligence officers for the killing.

Pompeo also defended the administration’s continued support for Saudi Arabia in Yemen, saying withdrawing it would undermine efforts to reach a ceasefire.

He said the US was “on a cusp” of gathering the warring parties for talks “to hopefully achieve a ceasefire”.

A vote, he added, would “encourage the Houthis” and their Iranian allies.

The conflict between Saudi-led military coalition and Houthi rebels has killed thousands of people and pushed millions more Yemenis to the brink of starvation.

The US provides intelligence support to the coalition and sells weapons used by the Saudis in Yemen.

What is the situation in Yemen?

The conflict began in 2014 when the Houthi Shia rebels seized control of the north of the country and went on to take the capital Sanaa, forcing the president to flee.

It escalated dramatically in March 2015, when Saudi Arabia and eight other mostly Sunni Muslim Arab states – backed by the US, UK and France – began air strikes against the Houthis, with the aim of restoring the government.

In recent weeks Houthi leaders have said they are ready to move towards a ceasefire if “the Saudi-led coalition wants peace”.

The coalition has recently ordered a halt in a fierce offensive on Hudaydah, a port on the Red Sea. They have also said that they support the UN-led talks.

The UN special envoy to Yemen, Martin Griffiths, has said he hopes peace talks convene before the end of the year.

The Houthis failed to show up at peace talks in September. (BBC)

November 4, 2019 byTSM Web Desk No Comments
McDonald's has fired its chief executive Steve Easterbrook after he had a relationship with an employee.

November 25, 2019 byTSM Web Desk No Comments
Hong Kong's leader Carrie Lam has said the government will listen to the public with an open mind, after pro-Beijing candidates were resoundingly defeated in local elections.