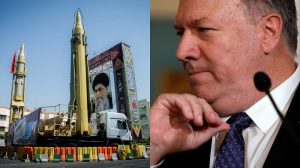 Washington has imposed a fresh round of sanctions on Iran’s nascent space program, arguing a recent botched Iranian satellite launch is evidence that the country is carrying out secret work on ballistic missiles.

The new penalties forbid American citizens from business dealings with Iranian entities affiliated with the country’s space initiative, including the Iran Space Agency itself and two of its research institutes, the Iran Space Research Center and the Astronautics Research Institute.

Secretary of State Mike Pompeo announced the new penalties in a statement on Tuesday, describing the Iranian space initiative as a “threat” to the US and saying that “the United States will not allow Iran to use its space launch program as cover to advance its ballistic missile programs.”

The decision comes in the wake of Tehran’s failed satellite launch last week, which Pompeo claimed only “underscores the urgency of the threat.”

A second State Department missive further explained the decision, noting that “Space launch vehicle (SLV) technologies, such as those developed by Iran’s space program, are virtually identical and interchangeable with those used in ballistic missiles,” although Tehran insists its space program has no military dimension.

September 25, 2018 byMalik No Comments
The co-founders of photo-sharing giant Instagram, Kevin Systrom and Mike Krieger, are both leaving the firm.