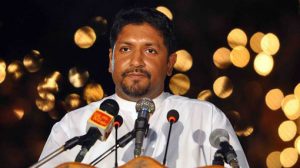 Non-cabinet Media Minister and State Defence Minister Ruwan Wijewardena affirm that Sri Lanka will not sign deals with America to allow them to build bases in the country.

In a statement, the Minister further added that not just the United States, but any other country for that matter would not be allowed to set up military bases in Sri Lanka.

President Maithripala Sirisena told journalists last week that he was opposing the renewal of a Status of Forces Agreement (SOFA) with the United States.

However, Government ministers had told parliament that the agreement will be renewed with some clauses such as those giving immunity to visiting forces removed.

November 16, 2019 byEaswaran No Comments
President Maithripala Sirisena said that while he could not complete some of his work as a result of the issues with the government, he is content with what he had done during his term.