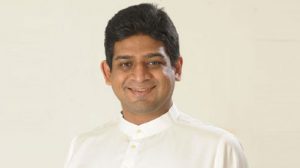 State Minister of Foreign Affairs Vasantha Senanayake today urged the DNF presidential candidate Sajith Premadasa to declare his stance on the future Prime Minister if the UNP led government is voted into power at the November 16 presidential polls.

In a letter addressed to Premadasa the State Minister said that his support will depend on clarity over the future roles to be given to Prime Minister Ranil Wickremesinghe and some members of the United National Front.

Accordingly, Senanayake’s questions to Premadasa included, “Will you appoint Ranil Wickremesinghe as Prime Minister? Will Ravi Karunanayake be appointed a cabinet minister? Will Rishad Bathiudeen be appointed as a cabinet minister?  In the background of Rauff Hakeem been accused of associating Easter Sunday bombing mastermind Zahran Hashim, will Hakeem still be apart of your campaign for your presidency?”

Senanayake said if Premadasa’s answers to these questions were unsatisfactory, he would withdraw from Premadasa election campaign. However, he said he would remain an MP in the party.

Senanayake in the letter went on to say that the presidential candidate continued to engage with those alleged of corruption.

“Those who threatened to leave the party in case you were nominated, those who ridiculed your tireless efforts as a minister, are surprisingly now at the forefront of the campaign. They even sit front centre stage (as witnessed in galle face).

March 15, 2020 byTSM Web Desk No Comments
The new Colombo Municipal Commissioner is currently residing in a residence taken out on rent due to the unavailability of an official residence, it is learnt.