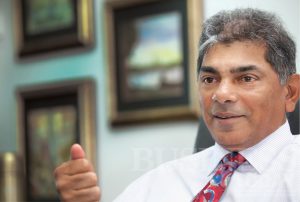 Fernando has over 40 years of experience in the tea industry and is the Founder Chairman of Heladiv Tea, a leading tea exporting company. He has also served as the Chairman of the Tea Exporters Association of Sri Lanka and as a Director at Sri Lanka Tea Board.

Beyond the tea industry, he has served as the President of the National Chamber of Exporters and as a Council Member and a Management Committee member representing the board of the National Chamber of Exporters of Sri Lanka. He has also served as a Director at several organisations including Ceylinco General Insurance Ltd. and Industrial Technology Institute.

Fernando replaces P. G. Kumarasinghe Sirisena, who served as Chairman of SLT from 2015 to the beginning of this month.

How coworking works in Sri Lanka

October 31, 2018 byCharindra No Comments
Teejay has reported sales of Rs 14.4 billion and profit after tax of Rs 704.8 million at Group level for the six months ending 30th September 2018.