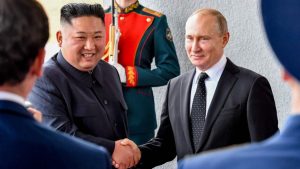 North Korea’s Kim Jong-un and Russia’s Vladimir Putin have pledged to boost ties at their first ever summit.

The pair shook hands on Russky Island near the port city of Vladivostok, in Russia’s far east.

The Kremlin said the leaders would discuss denuclearisation, but Kim is also expected to be seeking support after talks with the US collapsed.

The talks in Hanoi with US President Donald Trump failed to reach a deal on North Korea’s nuclear programme.

At their opening remarks the Russian and North Korean leaders referred to their two countries’ long history of ties and Putin said he wanted to help calm Korean tensions.

“I am confident your visit today to Russia will help us to better understand how we can resolve the situation on the Korean peninsula and what Russia can do to support the positive processes currently taking place,” Putin said.

Kim said he hoped for “a very useful meeting in developing the relationship between the two countries, who have a long friendship and history, into a more stable and sound one”.

The North Korean leader greeted Russian officials warmly when he arrived on Wednesday.

Kim was entertained by a brass band before he got inside a car flanked by bodyguards, who – in now familiar scenes – jogged alongside the vehicle as it departed. (BBC)

August 21, 2019 byTSM Web Desk No Comments
Cardinal George Pell, the most senior Catholic cleric to be convicted of sexual abuse, has failed in a legal bid to quash his convictions in Australia.

January 21, 2020 byTSM Web Desk No Comments
A fourth person in China has died from a new virus that has spread rapidly across the country, as authorities confirmed that it can be passed from person-to-person.