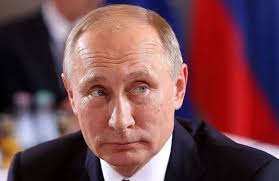 Russia’s President Vladimir Putin has accused the UK and US political classes of “disrespecting” the public by questioning the Brexit referendum and Donald Trump’s election.

“They don’t want to recognise Trump’s victory. That’s disrespect of voters,” he said.

“The same in Britain: Brexit happened, but no-one wants to implement it.”

He also warned that the world was becoming complacent about the risks of nuclear war.

The president’s comments came at his year-end press conference in Moscow.

Russia’s leader also said British Prime Minister Theresa May has no choice but to follow through with Brexit, as failing to do so would undermine UK democracy.

“She must enact the will of the people, expressed during the referendum,” he said. “Or otherwise it is not a referendum at all: doing it over and over again if someone did not like it [the result]. Is it a democracy?”

Putin described relations with the UK as in “deadlock,” saying it was in both countries’ interests to improve matters.

“Are we interested in restoring full relations with Britain? Yes, we are interested,” he said. “And we know that British [companies] work pretty actively here.”

The UK is one of a number of Western countries that have enacted economic sanctions against Russia over its annexation of the Ukrainian territory of Crimea and the nerve agent attack on former Russian spy Sergei Skripal in southern England. (BBC)

January 31, 2020 byTSM Web Desk No Comments
First two cases of coronavirus has been confirmed in the UK, Department of Health says.BBC