England dismissed any lingering doubts surrounding its Rugby World Cup credentials with a dominant 40-16 victory over Australia to reach the Semi-finals at Oita yesterday.

After enduring some early Australian pressure, two first-half tries in quick succession from Jonny May handed England control of the match and despite an early flourish from the Wallabies at the start of the second half, a flurry of late points secured England an emphatic victory.

“I was pleased with how the players stuck at the game,” England Coach Eddie Jones told media after the match. “In the first 20 minutes, Australia had 75% possession, were moving the ball well, and we had to defend. We hung in there, got some momentum back and took a couple of good opportunities which put us in a good position.

They came back through an error of ours and it was one of those ‘bring it on’ moments and we stuck at it and I thought it was great.”

England had beaten Australia in all of the sides’ last six meetings, not tasting defeat since that painful night in London four years ago. That day, Australia won 33-13 as England became the first host nation to exit the Rugby World Cup at the pool stages. 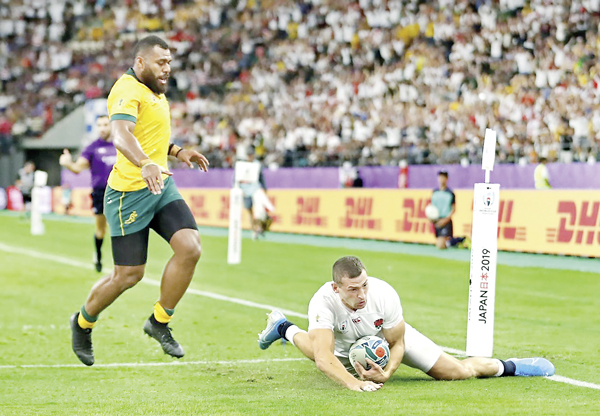 All Blacks too hot to handle

Ireland had beaten the All Blacks in two of their previous three encounters heading into their Quarter-final at Tokyo Stadium, but New Zealand was simply too hot for the Irish to handle on the occasion when it mattered most.

Aaron Smith scored two first-half tries before Beauden Barrett added another to give the All Blacks a formidable halftime lead, and further scores from Codie Taylor, Matt Todd, George Bridge, and Jordie Barrett kept up the momentum after the interval.

A late score from Robbie Henshaw and a penalty try belatedly got Ireland on the scoreboard, but it was not enough to stop the All Blacks from progressing to a mouthwatering semis against England, who beat Australia yesterday in their Quarter-final clash, in Yokohama next Saturday, 26 October.

The second week of the Rugby World Cup (RWC) was dominated by some controversy. The highlight of the week of course came in that wonderful game between Japan and Ireland where the hosts beat the team ranked no. 2 in the world. With it, Japan jumps to no. 8 in the world, the highest they have ever been, and consequently the highest an Asian team has ever been in the world.

Jamie Joseph’s side, despite conceding early, turned a corner in that Pool “A” clash, and really started believing when they shoved the Irish scrum backwards to win a rare penalty against Northern Hemisphere scrummagers.

That changed the game, and with Japan’s front row also dominating in the collision area, Ireland never really recovered. There seems to be a lot wrong with the Irish team at the moment, and they don’t seem to have the nous to get out of the tight spots they find themselves in. The bonus point against Russia came through sheer luck after the team had laboured their way to a scoreless half hour against the group’s plucky minnows. Joe Schmidt will need to remedy their belief as well as their attacking flair – or lack of it – before he goes into a quarter-final against New Zealand or South Africa.

(This article was filed before the RWC Q/F clashes yesterday)

September 27, 2018 byMalik No Comments
Eden Hazard is "one of the best in the world", Chelsea Assistant Manager Gianfranco Zola said after the forward scored a stunning late winner against Liverpool in the Carabao Cup.

November 1, 2018 byRevatha No Comments
Finalists were found in 'Bowl Out' contests after the semi-finals were washed off at NCC and MCA grounds.