We are from here project

Slave Island can be considered one of the oldest neighbourhoods in Colombo, and since the 1600s, the area has undergone many changes in its environment and culture. With the increasing density in population and high-rise projects towering over the colonial era structures, the old neighbourhood seems to be gradually disappearing. 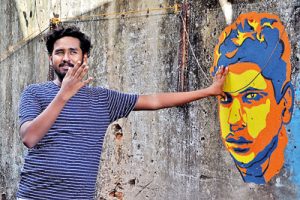 With that in mind, a group of artists from the neighbourhood, led by Firi Rahman, established an interactive mural project just last year. Aptly named “We Are From Here”, the project tells the story of the people from Slave Island.

In order to give life to this project, Rahman first started to collect stories from families down different lanes. He had digitally archived them in the form of voice cuts. In that journey, Rahman was joined by artists Parilojithan Ramanathan and Vicky Shahjahan. Wanting to make it a more interactive activity, the trio decided to draw portrait murals of the people from the area.

The Sunday Morning met with Rahman and Shahjahan to discuss how art is changing the lives of the people in Slave Island and breaking the social stigma that surrounds the area.

“Our initial idea was to have a giant mural where faces were to be drawn. We were brainstorming on the impact it would have on the people of Slave Island as well as the people that were visiting here. But then, we decided the murals should actually blend in with our environment and not disrupt the surroundings.”

The present state of this project provides any first-time visitor to the neighbourhood the opportunity to interact with the community, understand the dynamic of the area, and meet the people on the mural in person.

“The objective of this project is to break the social stigma that is built around the people of Slave Island. The perception by the outside world of Slave Island has been very negative, and through this project, we wanted to bring some positivity towards this place.” 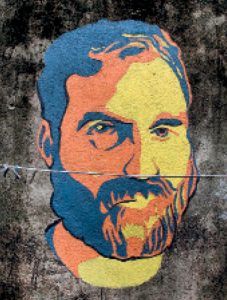 Rahman said that today, there are several national-level sportsmen and sportswomen from the neighbourhood, people who work in the hospitality industry, the humanitarian field, and arts.

“We believe that this project will narrate the rich heritage of the area and encourage the new generation to keep that heritage alive. It is the people who make up the culture of an area, and when the traditions of multiple ethnicities intertwine, it truly adds to the uniqueness of the surroundings.”

Recalling some of his childhood memories, Rahman stated that from as far back as he remembers, all the families would get together to mark days that are culturally significant.

“The ethnic or religious differences do not matter to us as we all grew up celebrating each other’s festivals and cultural events. Wekanda has an annual Avurudu event in which Buddhist, Hindu, Muslim, and Christian families in the area take part. For us, it is another event to celebrate our community.” 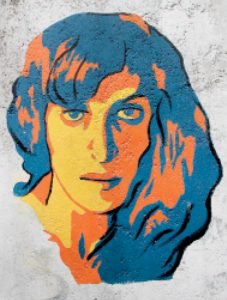 The most intriguing part of this project is the art walks that Rahman and Shahjahan coordinate. Since we were in the neighbourhood, we were offered a sneak peak into the art walks they conduct. “We try to keep the group to a minimum of six to eight persons, so the interaction with the community becomes better. During the walks, if the persons portrayed on the murals are around, we get the group to speak to them or observe as they go about their daily routines. Vicky takes charge in arraning meet-ups between the group and the person.”

Pointing at a particular face on the murals, Rahman explained that it was the first face he drew on a wall: “This is Fazil. He agreed with me and allowed me to draw his face on the wall. It was then used as a sample drawing to convince the others in the neighbourhood. When we introduce Fazil to the group, we share the story of how a funeral can bring out the togetherness in a community and is a great way to show that everyone cares for each other.”

On Fazil’s right was the portrait of Milan, who is also a wayside vendor. “When we have the official walk, we offer the group a food token which they can use to purchase a snack or faluda from Milan’s cart. That way, we are empowering the lives of our neighbourhood whilst telling a story to the group. As a person who has grown up in Slave Island, Milan believes that everyone must work together for the community to thrive.” 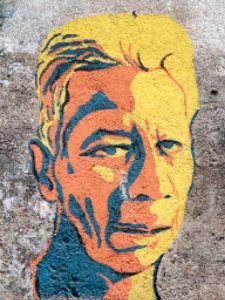 Meanwhile, the people in the area also take interest in telling their stories to the groups that come. They are opening up to strangers and inviting them into their homes.

“There is a national-level cricket player from the women’s cricket team in the area. We have approached her, and hopefully, during the next phase of this project, we can draw her and narrate her story.”

Rahman said that people now volunteer to help them with the art walks and word has got out about this project: “We get inquiries to host art walks from time to time, and sometimes, people who work in corporate offices around the area join them. As they walk through our neighbourhood, their perception of us rapidly changes.”

The team is also looking at mentoring youngsters from the area to conduct the walks, so they too would be able to improve their people skills. Some have already shown enthusiasm, and Shahjahan said that when a visitor comes to the area and stops to look at a mural, they voluntarily go speak to them and explain who is on the mural.

The walk through the neighbourhood gave us a sense of security and belonging. This is the essence of true Sri Lanka – of how we all live in harmony and keep our doors and hearts open even to strangers.

October 4, 2018 bythemorninglk No Comments
Sri Lanka Freedom Party (SLFP) stalwart and Minister of Ports and Shipping, Mahinda Samarasinghe, commenting on the recent statement made by President Maithripala Sirisena at the United Nations.....

April 7, 2019 bythemorninglk No Comments
Ragging took its toll on another student recently, that of a 23-year-old male who was studying for his National Diploma in Technology (NDT).