We shall weather this storm too

There is an apparent resurgence of Covid cases. The incremental and progressive journey towards normality is partially on hold. Public administration is not completely restored while the agriculture, manufacturing, and services sectors – whether in public or private hands – have not fully got “back on its feet” as it were. Thus, any survey of biz confidence will be academic or naïve. Our priority is health and safety. It is a prerequisite to economic activity and confidence in the country, whether for business or for leisure.

Sacrifices and discipline: Has it been in vain?

Over a three-month-long period, we disciplined ourselves by confining ourselves to our homes, complying with all advice, guidance, and instructions, making necessary sacrifices, urging others to fall in line, contributing to reducing the challenge to public health and public administration officials rather than adding to their burden, closing shops and offices, etc. Governments rolled out finance for payroll and working capital. It was unprecedented. Some may say, our locked down was in vain. Yet, though easier said than done, getting into the woodwork is not an option.

The reckless abandon with which the funeral of late Minister Thondaman was conducted by the Government resulted in a loss of credibility and seriousness in the approach to containment. The way in which the return of people from countries that are sources of the virus have recently been facilitated, with political interference and intervention but sans the necessary protocol, accentuated this. Despite all this, I like to be positive; hence, I could not help but reflect on the past, if nothing else, to justify my optimism about a future we might yet be able to shape.

Yams in our college quadrangle

A little humour is necessary. In the lifetime of some of us, we have not had health-related pandemics in the country which have destabilised us, or natural disasters which have devastated us – except for the tsunami 16 years ago – or floods that have intermittently affected the livelihoods of many. We have also been spared of economic collapses while East Asia was in crisis in 1997/98 and the world itself endured the Global Financial Crisis (GFC) in 2008. Of course, fellow Thomians of our alma mater would recall that during the 1970-77 period of austerity and bread queues, we were instructed by the then Government to grow more food on the quadrangle, an integral infrastructure of that school by the sea – a golf like green – surrounded by a pure white border. But we survived that era. 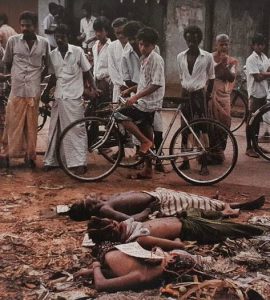 JVP and the southern insurrection in ‘71

Throughout my years of growing up, I had not experienced any conflicts requiring the interference of the Army or the Police. That happened in 1971 when the JVP (Janatha Vimukthi Peramuna) insurrection took place. I recall how my brother, three sisters, and I stayed away from our schools at S. Thomas’ and Ladies’ and took refuge in Getamanna, my village of birth, in the Hambantota District – perhaps one among the better villages anywhere. We felt safer and more secure and also had great fun. Of course, while nothing was online, everything was at hand. 18 years later, they struck again. We endured.

Yes, it was 1988/89 when the JVP struck again. Sometime after that, after being away for 10 years in the Bahamas and the US, I returned to the country for good, despite advice against doing so. Many friends asked me to get my “head tested”. That was in March 1989, but this time, my parents cautioned me about visiting our home in the village even though they remained unharmed and untouched. This type of insurrection is now behind us.

Unharmed and untouched: Neither flamboyant nor extravagant

When Covid-19 forced us to stop and think and live a life of confinement and contentment, forgetting the lifestyle we were used to with the creature comforts we had got accustomed to, I was reminded of an article I wrote about the ‘71 and ‘89 period when my parents were unharmed and untouched.

I wrote: “We were unharmed and untouched because my father, together with my mother, lived a life which was neither flashy nor flamboyant, neither aggressive nor oppressive. My father practised his law in the courts of Tangalle while overseeing his paddy, coconut, or cinnamon lands, but was not extravagant or excessive in his approach to either. Politicians of both major parties came to him. He did not go to them or bend his head or bow.” 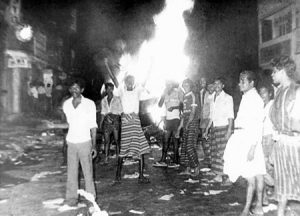 The ‘83 riots and a visit to my former employer

I was overseas when the tragic events occurred in 1983. When I returned in December 1983 on a brief holiday, I visited my former employers, Ford Rhodes and John Keells. A senior director of one of the organisations I visited, who was in fact instrumental in my first recruitment just as I qualified, inquired why I had not replied to his letter. I told him that I had not received any. He then gave me a copy.

Tears rolled down my eyes when I read the letter of many pages. He had asked me to find him a job in the Bahamas. The situation had now improved, he said, and he told me that he had changed his mind. What a loss it would have been to the Group as well as the country if he had migrated. Although he is no longer with us, I and many will always remember him with great respect and affection. This story does not end there.

The tragic story of a trainee

A niece of his had joined his division as a trainee secretary about six months before I left for the Bahamas in 1980. He had wanted me to train her. His division and mine gave her a lot of work, which she performed with great enthusiasm. I was happy to guide her. He asked me whether I had heard the news about her. When I said no, he told me how her father and brother were burnt alive in Wellawatte in the ‘83 riots. I was shocked. I inquired how I could see her. He rang the bell and asked the peon to ask her to come in. She was still working with him. I stood up, hugged her, and could not help but tear even more.

I gathered on my return for good in ‘89 that she had migrated. I thought it necessary to share these stories – lest we forget these – which were not Covid-induced. They were self-inflicted by a nation. We watched while many a dynamic Sinhala political leader – late President Ranasinghe Premadasa, late Minister Gamini Dissanayake, late Minister Lalith Athulathmudali, and many more including fine officers and gentlemen of the forces – were killed. These are stark reminders to those who yet attempt to trifle with this truly beautiful land like no other. Yes, we survived that era too.

Even second waves need not be terminal

The negative sentiment of stock markets here in Sri Lanka or in key markets, which are induced by a resurgence or second wave of Covid-19 with resultant delays in opening airports, schools, businesses, and a restoration of normality, are common to many tourism and portfolio investment destinations. We are not inflicted with a terminal illness. Let us thus not get into the woodwork. We are more aware, better equipped, and far more prepared, as with many countries who have got their act together, while the WHO (World Health Organisation) itself seems confused and undecided many a time. So much for global healthcare leadership. So much also for the US who pulls the plug out recklessly and egotistically at a time when the WHO has got itself in a twist, whether it is to mask or unmask, whether droplets which can infect are airborne or not. Thus, we are all learning! 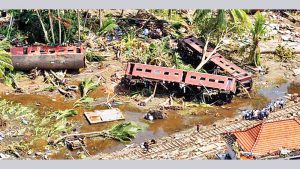 We have a new label. We were just redefined as a lower middle-income (LMI) country. This to my mind is an opportunity – a timely opportunity – that should be leveraged. I was never enamoured about us being defined as an “upper middle-income” country, which definition I have critiqued publicly. But then, I am not an economist and do not profess to be one. Yet, I am bold enough to say that the World Bank needs to get on the drawing board on this one. This definition starved us of concessional funds we “richly” deserved. Governments even borrowed on commercial terms. It is the equivalent of a premature promotion, robbing an otherwise developing child of a healthier development journey.

We are ‘worthy of a helping hand’

Based on precedents we know about IMF (International Monetary Fund) or US operations – whether in Central or South America, Asia or Africa, Mexico or Peru, or Argentina – or how the world came together with the “Afghanistan Compact” two decades ago, I say that we are a nation yet worthy of a helping hand. Provided the Government, the Central Bank, the Ministry of Finance and the Treasury, and the development partners approach the work cut out for them without trifling with time, I believe we can overcome these formidable hurdles.

Optimism need not be dashed

Optimism has energised us all, and rightfully so, until a few days ago. Hence, the resurgence of Covid-19-afflicted persons, that too at an alarming rate, is certainly worrying and unfortunate. Drugs to recover from the virus within a shorter period than what trials have reported and a vaccine to eradicate it are not on the immediate horizon. But we are not alone. The world at large is on the same page. Our challenge is the challenge of most nations, if not all, and I bet we can overcome…and overcome we will. But this requires statesmanship rather than salesmanship or showmanship, maturity, discipline, seriousness and substance, organisational skills, and so much more.

Consensus builds around the privatisation of tourism promotion

September 29, 2019 byThe Sunday Morning No Comments
Consensus is growing amongst key tourism industry stakeholders that Sri Lanka’s tourism promotion activities should be taken over by the private sector,