England have shown they can no longer be considered “a one-trick pony” who can only win at home, according to their captain, Joe Root.

While they have long had a strong reputation at home, where their seamers are often able to exploit helpful conditions and a Duke’s ball, England’s results away from home have been far less impressive. Going into this tour, they had not won any of their last 13 away Tests and were without an away series victory since early 2016 in South Africa. 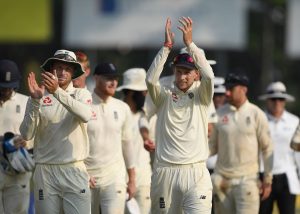 Joe Root and Jos Buttler do a lap of honour after England’s 3-0 win on Monday, 26 November at SSC, Colombo

But, by completing a 3-0 series win in Sri Lanka, England have managed a first-ever whitewash in Asia (in series of three matches or more) and first away from home anywhere since 1963.

And, underlining the changing face of this side, they have done it without their leading Test run-scorer, Alastair Cook, who retired at the end of the English summer, and with their two senior bowlers, Stuart Broad and James Anderson, contributing just one wicket between them. Instead their trio of spinners claimed 48 wickets (49 if Root’s one victim is included), while the batsmen took a much bolder approach to the turning ball than is typical for England sides.

That, Root believes, shows the adaptability of his new-look side. And it is a quality he has urged his players to continue to embrace as they look ahead to 2019, in which tours of the Caribbean, New Zealand and South Africa sandwich a home Ashes campaign.

“We’ve had to do things very differently here,” Root said. “It’s been amazing how much the ball has turned. So the most pleasing thing is how quickly we adapted to that. We’ve had to adapt and grow as a group.

“We’ve been brave. We’ve done things differently to how we have in the past, but that’s not frightened us. We really bought into that and played it to our advantage. We’ve got three wonderful spinners that complement each other very well, backed up very ably by some very good seam bowling

“It’s nice to know we don’t just rely on Anderson and Broad. We gave opportunities for young, less experienced guys to step up and show their worth. Those three spinners dovetailed really well and built pressure.

“Look at Rory Burns, as an example. He’s been a consistent performer at the top of the order for Surrey, but has spent most of his time facing seam bowling with the ball zipping around. Here, on his first trip with England and all the pressures that brings, he has faced spinners with a new ball, which is completely different to anything he will have experienced before. But he has been brilliant and played a vital role. That’s one example of how we’ve adapted and grown as a group.

“But we’ve got to be open to doing things differently wherever we go. We’ve done things in a certain way in these conditions. But it will be different in the West Indies, different in South Africa and obviously very different in Australia next time we’re over there. That’s the one we really want to get right. But we’ve got some time to figure out what’s going to work for us and adapt our squad to exploit those conditions.

“It’s about being adaptable and we’ve shown we can do that. We’ve shown we are not a one-trick pony any more. And that should fill us with a huge amount of confidence going into future tours.”

While Root, who is getting married at the weekend, was particularly pleased that the victory had been a good squad effort, he did pick out a few of his players for praise. Moeen Ali, who finished with 18 wickets, was one, with Ben Foakes, who was named player of the series, another. But his most effusive praise was reserved for Ben Stokes.

“Moeen has really stepped up as a senior bowler and led the way,” Root said. “He’s been quite vocal at times on plans and trying to get the best out of the other two guys and he deserved a lot of credit.

“Foakes has been brilliant, too. He has come into the team on very difficult surfaces, stood up to the stumps for long periods of time and looked pretty faultless. It’s great to see him take to Test cricket as well as he has.

“But we all know that, at any stage, Ben Stokes can turn a game on his own. There were a couple of moments of brilliance in the field in Kandy and then here he found a way as a seam bowler to expose batters on this surface. That’s a great skill. With bat and ball, he’s adapted to different roles, whether that’s been looking for reverse swing, trying to bowl short, or batting up and down the order.

“He always gives absolutely everything and he’ll never shy away from any challenge put in front of him. He’s a complete team man and sets a brilliant example to the rest of the group. He is a great leader within that dressing room.”

But while Root stressed he was proud of his team, he was unapologetic about leaving senior players such as Broad and Jonny Bairstow out of the side.

“Look at any side that’s No.1 in the world,” Root said. “They’ always got some very good players missing out.

“That’s where we want to be. We want to keep pushing, keep improving and get to that No.1 status.

“If we’re really serious about that, guys are going to have to work very hard and accept that on occasions they’re going to miss out. Having that environment is going to keep driving the guys in the team forwards.

“It feels like we’re in a good place at the moment, we can’t be happy with where we are. We’ve got to keep looking to improve. We’ve a lot of hard work to do, but it’s great to see us grow at a team on this trip.”

Barbadian Archer to play for England at WC

November 30, 2018 byRevatha No Comments
Archer, 23, was born and raised in Barbados, and represented West Indies at Under-19 level.