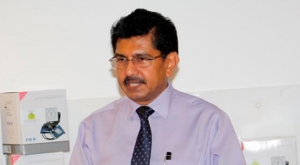 Jasinghe was responding to media queries about the controversial sexual and reproductive health education book for 7th graders at a press conference yesterday.

He said that even though sex education was an important subject for school children the concept was difficult to integrate into the education system due to cultural constraints.

He said a decision on the books will be reached following discussion with the Health Ministry and the Education Ministry.

On December 24, Medagoda Abhayatissa Thera claimed that the Yahapalana Government had published a textbook on sex education that corrupted the the minds of the 7th graders.

The Health Minister and the Education minister at the time were Rajitha Senaratne and Akila Viraj Kariyawasam.