What colour is a mermaid? 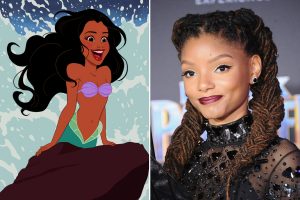 This week, let’s look at more positive news. I am getting tired of wading through all that’s going wrong in this world in general, Sri Lanka in particular.

So what do you go to when you need to switch off from real-world events for a while? I don’t know about you, but in my childhood, I used to turn to Disney.

It’s a childhood habit I never fully outgrew. Whenever I am feeling down, I YouTube chunks of old Disney cartoons to watch, specific chunks that used to make me laugh as a child, such as the magical fight between Madam Mim and Merlin in “The Sword in the Stone” – Disney’s adaptation of the legend of King Arthur. It’s not always a good idea to revisit your childhood like that however; times change and so do your awareness and perceptions as an adult. I still enjoy that scene, but not without some mental eye-rolling over all the pink animals Madam Mim changes to versus blue ones for Merlin.

Also, the concept of the bad witch versus the wise wizard is problematic to say the least. This is a whole other trope in literature as a whole, not just Disney’s problem. Women with magic are portrayed as ugly, cranky old witches while men with magic are benevolent, adorable old men – trust the patriarch with the flowing white beard, he knows all and means well; unlike that cat-owning, broom-wielding, single, independent woman up to no good for society. No, I am not being frivolous in my criticism here – this trope got women burned at the stake a few hundred years ago. And even now, as a single, independent woman, I can attest to the fact that I make many people nervous just by existing. Society in general appears to be suspicious if not downright terrified of single, independent women. They never got over the patriarchal mindset that we can be anything other than “pregnant and barefoot” in the kitchen, and if we are, it doesn’t automatically mean we are “up to no good”.

The good news though is that in some parts of the world, societies are listening to the thus far marginalised and voiceless – women, children, non-heterosexuals, different genders, different races, and minority groups – and incorporating their feedback into media narratives so that the propagation of harmful tropes can be reduced to some extent. Disney is at the forefront of this.

It wasn’t always so – Walt Disney did not allow talented women artists to work as cartoonists in his firm, they could just colour the drawings made by male artists if they were hired at all. He has a long list of other misogynistic charges to his name on how he treated female employees, but times change and the company he founded learnt they can’t get away with that management style anymore. If you want to remain relevant, you have to change with the times. To insist on being a dinosaur in a changing world is not a good idea.

The changes that Disney thus initiated over the years in response to such societal changes and then the attendant backlash which inevitably ensue from sections of society not ready for that change have always been amusing to watch. One of the first Disney tropes to go was its mainstream default trope – that of the helpless damsel in distress waiting for her prince charming. There was huge backlash against the strong, female characters not dependent on men and not looking for one, whom Disney attempted to introduce in the new millennium. These are however, Disney classics now with a new batch of millenials who grew up with them and swear by them. The times, they are changing; and you – you sit back and watch, and learn. Don’t hanker for the good ol’ days when “things were simpler”. Things were simpler back then because we didn’t question truth to power.

The latest issue (not-so-latest actually, but at least better now than never) Disney is trying to address is diversity. With a few notable exceptions like Pocahontas (which was a direct response to the criticism on the lack of diversity), most Disney princesses continue to be exclusively white skinned.

In a country like America where it’s not only the white-skinned who live, a lot of people were feeling excluded from mainstream representation. And after all, Disney is now a global phenomenon watched across the world, not just by Americans. Even white-skinned girls have unrealistic body images to live up to via those Disney princesses, but the effect on the children of the rest of the races was to entrench notions of white supremacy in beauty. It needed to be challenged, and after years of campaigning by activists challenging such white supremacy, Disney is finally addressing it – via the casting of the mermaid Ariel as a black woman.

The internet went up in flames. It is quite hilarious actually to follow some of the exchanges – increasingly snide and sarcastic, from proponents at both ends of the change process; those for, as well as against.

I wasn’t aware of the debate raging when I woke up to a rant on Facebook by a conservative American editor some days ago. He was raging on about Batwoman being cast as a lesbian because “you just can’t have a straight, white male anymore in this new politically correct age. Every new or rebooted character has to either be gay, female, black, Latino, or more than one of those”. The post I saw was shared with a screenshot of a woman hilariously responding to him: “So you want Batwoman played by a straight, white male?”

Over on Ariel’s debate, the exchanges are even funnier. The Little Mermaid was a tale written by Danish writer Hans Christian Anderson in 1836. Many Americans outraged with Disney are pointing out that Ariel would thus be Danish – and therefore, unassailably white.

The Danes are not as perturbed; “Do Americans think we don’t have black people living in Denmark too? Because we do,” noted one Danish Twitter user. However, the naysayers maintain, the 1836 original is a “classic” that ought not to be tampered with. But then, Disney tampered with it quite a bit when they made the 1989 The Little Mermaid cartoon, changing it from a tale of heartbreak and unrequited love to a typical Disney tale of “happily ever after”. No one quibbled over the changing of classics then. Rather ironically, the 1989 cartoon is also being hailed as a “classic” which can’t now be changed, apparently. So any new remakes that Disney attempts have to remain faithful to the original cartoon as per the conservatives. Says who? Anything spawned in 1989 is not old enough to be considered “classic”. Ditto for anything written in 1836 for that matter. But even if they are classics, who cares? Storytelling was invented by humans to make sense of the world around them, and if the world now makes a little more sense than back in 1989 or 1836 (as it damned well should), then we should change our storytelling to incorporate that newfound sense.

As for what the story as originally written by Hans Christian Anderson actually intended to portray, that’s a very interesting tale by itself. It turns out Anderson fell in love with a young man called Edvard Collin, who treasured him as a friend but did not return his love. When Collin got married in 1836, Anderson retired to an island to lick his wounds in solitude, where he wrote The Little Mermaid – written about a heartbroken character who could not belong in human society, could not speak, and could not express their love to the loved one; in short, how Anderson felt over his romantic leaning at that time in society – and sent it to Collin. Disney is still probably not ready to show that particular aspect of the story as it was intended in the classic by Anderson. The change-averse conservatives should be careful what they ask for, they might get their wish soon. But if the little mermaid, instead of being a red-haired damsel, is portrayed as the gangly, awkward, bumbling Anderson (as he was said to be in real life – you can catch flashes of that in how he portrayed Ariel as bumbling when she got her feet), they might get the shock of their lives. Poor dears.

Meanwhile, there is a lot of snark going down on the internet on how an imaginary mermaid should “really look” and whether it is more likely she was a redhead or dark-skinned, given that she spent most of her time above water on the beach; among other things, listening to calypso music and hanging out with a Jamaican crab. It was also pointed out that redheads can’t handle sunny beaches without tons of sunscreen, which Ariel was not shown to have used once in any of the classic versions. The skin debate is still raging.

One thing is for sure though – if Merpeople were to exist, it’s highly unlikely they would all be white or heterosexual. The original writer Hans Christian Anderson could have told us that, but we weren’t listening then, and not many are listening now. Sometime in the future perhaps? As our understanding evolves, so too will our storytelling; and with that, what Hans Christian Anderson could not express openly in 1836 could finally find expression. The little mermaid would then finally find her voice. We are still not certain about her skin.

(Thulasi Muttulingam is a freelance journalist based in Jaffna. All views expressed are her own and not of any organisations affiliated to her)

The games the President plays

October 28, 2018 bythemorninglk No Comments
Just last Sunday, this column contemplated whether President Maithripala Sirisena, the head of government, was representing the Opposition. On Friday, at around 8 p.m. it came to pass that our.......

A pardon, a penalty, and a populist

February 3, 2019 bythemorninglk No Comments
There are things that have political currency in Sri Lanka (Free education, healthcare, reduced cost of living), apart from these there are stranger things that can gain currency in this country.