Sajith to contest with Ranil’s blessings 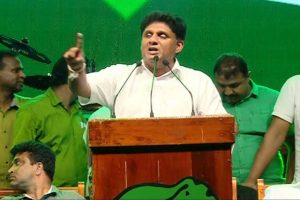 Premadasa was speaking at a rally organised in Kurunegala this evening.

The UNP has said that it will announce a candidate once elections have been declared.  Both the Prime Minister Wickremesinghe and Speaker Karu Jayasuriya are among the contenders apart from Premadasa.

Premadasa said that false allegations are being made against him yet he was not shaken. “I do not have blood on my hands nor have I been accused of corruption.” he said.

Speaking of reforms that will be put forth if he is elected as president he said,   “Women will be protected under my government. They will be given the necessary support to start small businesses. Through this we aim to reduce household poverty. A policy statement for women and the youth will be produced to parliament in November”

“Welfare for the armed forces will be ensured.” He said.

“The development of the Buddha Sasana will be given priority. There will be a 4 year programme to build 1125 Chaithyas around the country.”

He further said, Churches that were affected by the Easter bombing will be re-constructed along with Masjids that were damaged in the aftermath.

“We will ensure that the distribution of land and the construction of houses takes place.”

He further said fisheries, Agriculture sectors will be uplifted.