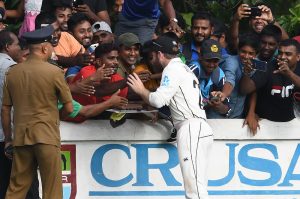 A rare gesture by an overseas Captain

As soon as it was time for drinks –during first day’s play of the warm-match between touring New Zealand and SL Board President’s XI at the FTZ Grounds, Katunayake– which allowed a break in play, Kane Williamson was seen happily trotting over to the fans, and to their joy, taking a bite out of the cake as a fan fed him, before the New Zealand Captain took a piece of cake into his own hand and fed the man in return. Williamson gave high fives, posed for a video or two, and returned to the field as his team-mates were getting ready to take their positions again.

His bowlers aren’t having a lot of luck on a surface that seems to have completely neutered quicks. It’s hot. It’s humid. It had rained earlier.

These aren’t necessarily the ideal circumstances in which Williamson may have liked to spend his 29th birthday (a long day of batting might have been more to his liking). But his day, was, nevertheless enlivened by a smattering of fans that had come to watch the game at Katunayake. Having learned that it was the visiting captain’s birthday, a group of spectators brought a cake to the periphery of the ground, and beckoned Williamson over.

The recent World Cup won Williamson and New Zealand many admirers across the planet over the past few weeks. In Sri Lanka, though, New Zealand have long been a well-liked team. Their captain can only have won over more hearts on the island, as he indulged a few fans who had sought to indulge him.

October 20, 2019 byPubudu Chinthaka No Comments
Recently, a lesbian relationship of a leading SL women’s cricketer went viral on social media. (But nothing much on that still in mainstream media!)