Wisdom Wednesdays to champion unity and working together

Since we are required to stay at home due to the prevailing crisis, it seems like an awfully difficult time for women to rally together and stay empowered. To support one another during this crisis, seven women – Kaira, Soraya, Caryll, Farzana, Kamani, Ameena, and Selvi – gathered together to prove that as long as we stay connected, nothing can stop us from building up women’s voices and the momentum of women coming together in this country.

These women, who themselves come from diverse backgrounds and walks of life, have contributed in multiple ways in uplifting women and children, ushering social change, and promoting unity in Sri Lanka. They have given better opportunities to other women, whether in housing, water, mental support, counselling, income-based approaches, meditation, or teaching.

These power women decided that after all the work they have already done, now is the time to take it to a higher level of awareness, showing that women are capable of so much more. Hence began Wisdom Wednesdays, a weekly panel discussion conducted via zoom. Wisdom Wednesdays’ focus is on one very important aspect in Sri Lanka – how diverse we are and how we are able to come together and celebrate our diversities and differences; how we could stick together as one people and nation – an unbreakable force. These women do not give importance to their last names so as to not differentiate but work as one.

They aim to mobilise women on a national platform to promote national unity in Sri Lanka.  Speaking to The Morning Brunch, Soraya said that they have seen how women are so powerful in numbers in this country. However, according to her, what these women lack is the awareness and knowledge on how to empower themselves to take effective action. She said that even in daily household, it is the woman – or the mother who is the leader of the house – who nurtures the family and makes the biggest impact on other members’ lives.

What Wisdom Wednesdays seeks to ignite in the women of Sri Lanka is this innate quality of leadership and bring it onto the national forum, allowing them to serve their country in ways they were born-capable of.

They acknowledge the fact that although we cannot go outside, we have been given a great opportunity of being able to connect with our fellow women through technology. Hence, they resorted to conducting the panel discussion online. They want to expand into talking about topics which will give a more wholesome framework for transformation – to create change in a national level.

They have seen that Sri Lanka already has many strong and powerful female feminist activists and so they thought of doing something differently. In order to achieve national unity, they are focusing on getting women to take responsibility in their own individual lives and do something in their daily lives in support of the cause.

The group said that there needs to be a change in how women think and help the nation unite. This change comes from reaching out across differences to find our common ground; to resist the pull to polarise and look down on those who are different from us. If they can begin at home with their families with small meetings in the neighbourhood or just helping their friends, thus empowering other women they know, that would begin to create a national force to support the greater drive of a united and better tomorrow. 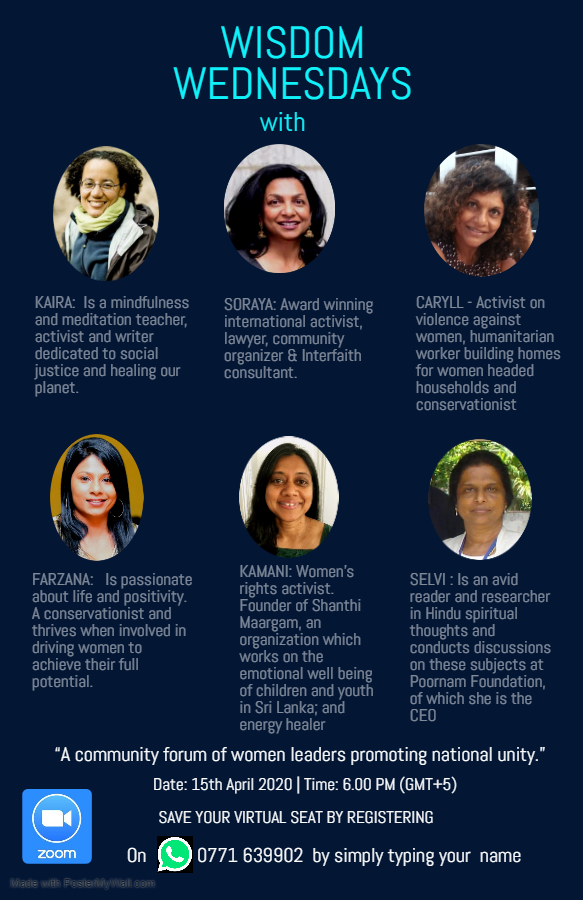 Wisdom Wednesdays April 29 6 P.M. Save your virtual seat by registering on WhatsApp or SMS 0771 639902 Event link will be sent only on the day of the event.

Soraya spoke about how women are always told to be selfless. Through Wisdom Wednesdays, these women hope to break this chain of telling women to think about others instead of themselves and push them towards being self-aware and knowing their self-interests. This does not mean to advise other women to be selfish, but rather to know what they want and think about themselves too and stop the people around from making them feel obligated to be living their entire lives for other people.

So far, Wisdom Wednesdays has gathered a mass of around 400 people to be registered in their site and about 150 inquire about being part of the panels.

However, in reality, their message spreads far wider than that as they have even received feedback from people living overseas, such as in Australia and the US, telling them they are doing something very important and asking them to keep going.

When possible, the group hopes to conduct face-to-face workshops all around the country, giving women the tools to empower themselves and their friends according to their noble analogy.

They will continue into greater heights and cause the embodiment of their slogan: National Unity – Pass It On!

Wisdom Wednesdays
April 29
6 P.M.
Save your virtual seat by registering on WhatsApp or SMS 0771 639902
Event link will be sent only on the day of the event.

February 7, 2019 bythemorninglk No Comments
Coming from a humble beginning, the boutique first opened as a small tailoring operation for friends and family in the late 80s, had held its first open house last Sunday, 27 January.

October 15, 2020 bythemorningeditor1 liberty No Comments
Marriage and Covid-19 have had an awkward relationship. Covid-19’s first appearance on the scene wrecked the wedding dreams of many couples looking to tie the knot in 2020.