January 20, 2020 by themorninglk No Comments 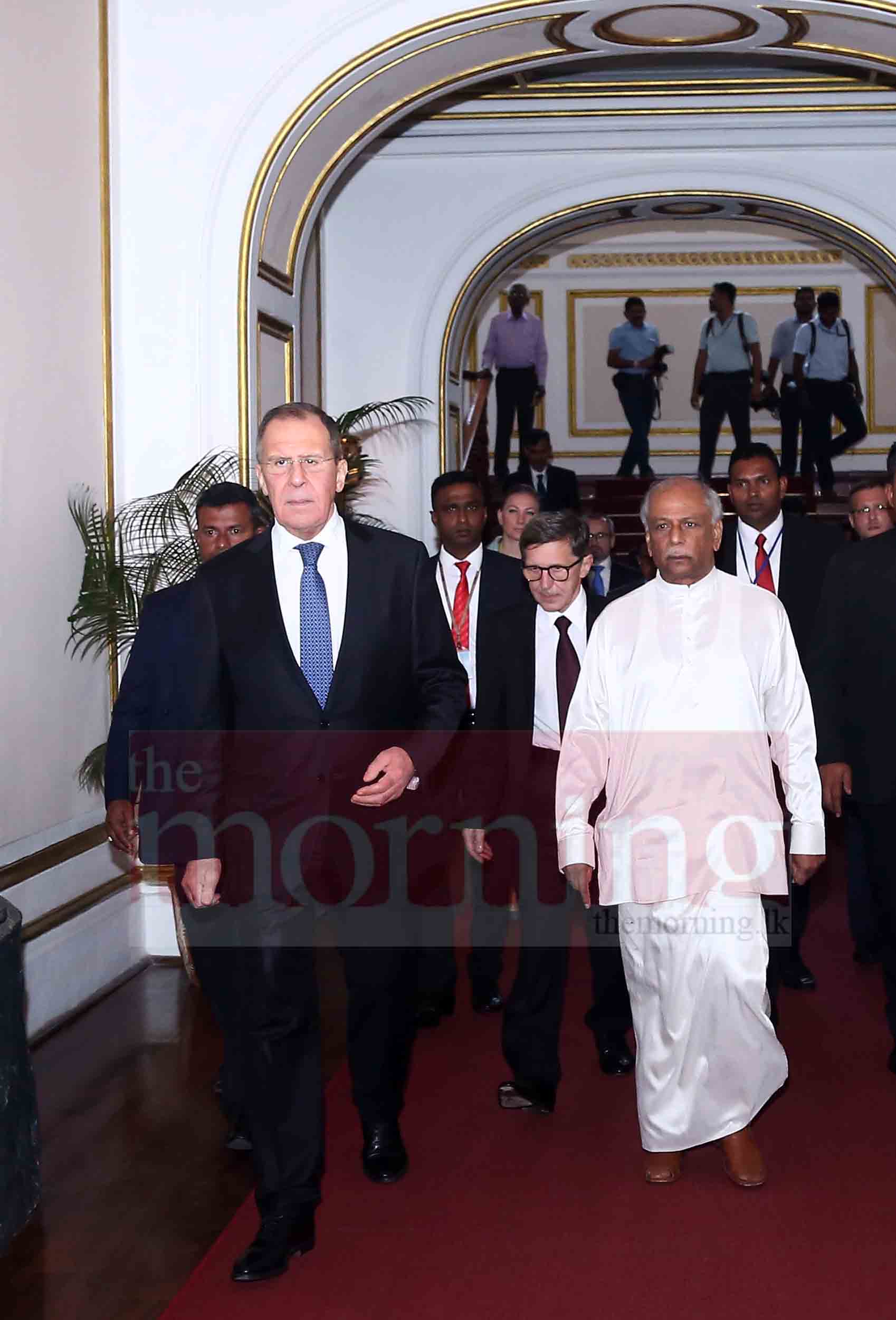 World powers have sought a bigger stake in Sri Lanka as the cold war between the US and China intensifies.

Top officials from the US, China, and Russia were in Sri Lanka last week for the first set of high-level talks between their respective governments and the Government of President Gotabaya Rajapaksa.
China’s State Councillor and Foreign Minister Wang Yi, Russian Foreign Minister Sergey Lavrov, and Principal US Deputy Assistant Secretary of State for South and Central Asian Affairs Alice G. Wells were in Sri Lanka last week, at the same time, for bilateral talks.

Also in Sri Lanka at the time was UK Special Representative for Afghanistan and Pakistan and UK Foreign and Commonwealth Office Director – South Asia Gareth Bayley.

Bayley was involved in less publicised talks with Sri Lanka, focused mainly on post-war reconciliation, while the US, China, and Russia seemed to have wider interests.

Both China and Russia are involved in a bitter war of words with the US on multiple issues and that war saw Sri Lanka being used as the battleground last week.

And while the cold war continued to escalate, the US, China, and Russia offered economic support to Sri Lanka. Support which some fear, if accepted, will come with strings attached.

Sri Lanka is seen by all three countries as being strategically located in the Indian Ocean.

Wells told a select group of journalists just before leaving Sri Lanka following her visit, that the fact that officials from all three countries were in Sri Lanka showed how important Sri Lanka was to these countries.

During talks in Colombo, Russia agreed to take additional measures with Sri Lanka to increase trade from the current $ 400 million to $ 700 million per year.

“We will pay special attention to this issue during preparations for a regular meeting of the Intergovernmental Commission on Trade, Economic, Scientific, and Technical Co-operation that will take place in Russia in the latter half of this year,” Russian Foreign Minister Lavrov said after talks with Minister of Foreign Affairs Dinesh Gunawardena.

Chinese Foreign Minister Yi told President Rajapaksa that Sri Lanka may have less landmass, but will soon be strong economically and China will be with Sri Lanka as it strives to reach that goal.

The US, meanwhile, said that it was in talks to provide Sri Lanka alternatives to counter offers coming from China.

Principal US Deputy Assistant Secretary of State for South and Central Asian Affairs Wells, responding to a question posed by The Sunday Morning at a meeting with five journalists at the Bandaranaike International Airport, before leaving the country, said that the Hambantota deal was an unfair deal for the people of Sri Lanka.

She was referring to the Hambantota Port which has been given to China under a 99-year lease agreement.

The US and China, last week, signed an important trade agreement which seemed to indicate that all was now well between both countries.

However, Wells reiterated that the US remains concerned over a lack of transparency pertaining to Chinese projects in Sri Lanka, which she noted has led to an empty airport (Mattala Airport), empty business tower (Lotus Tower), and projects which suggest proper feasibility studies have not been conducted.

The Chinese Government is, however, not prepared to be dictated to by any country and does not want any country to dictate terms to another country.

“We will not allow any outside influences to interfere with matters that are essentially internal concerns of Sri Lanka,” Minister Yi had said.

Russian Foreign Minister Lavrov also took a swipe at the US, accusing Washington of taking illegal action which reached its peak with the murder of General Qassem Soleimani, Head of the Iranian Revolutionary Guards’ Quds Force and an official representative of the Iranian Government, who was on a visit to neighbouring Iraq.

“This is beyond international law and humanism. We are against the escalation of tensions no matter where they emanate from. We are calling on the US and Iran to display restraint and resolve all problems through dialogue. As far as I understand, the US is saying it is ready for dialogue with Iran without any preconditions, although what it calls suffocating sanctions against Iran are ramping up during proposals on such dialogue.

“It so happens that while inviting Iran to dialogue without preconditions, the US itself lays them out by subjecting Iran to pressure via sanctions,” the Russian Foreign Minister said.

Wells, however, defended the killing of Soleimani saying he directed terrorist proxies in Iraq who attack US soldiers, Americans, and Iraqis.

“Very few people argue to me that General Soleimani is a good guy,” she said.

Wells said that Soleimani took pride in his actions and there were consequences to his actions, which was his killing.

The tensions in the Gulf following General Soleimani’s killing have been a concern to Sri Lanka and other countries.

Russia said it understood the concern of Sri Lanka over the negative consequences of the conflict in the Gulf area, which may affect exports of traditional goods.

“Therefore, it is in our common interests to build trust in the Gulf and beyond. This is the aim of the Russian proposal that we again presented at a special conference in Moscow last September. I am referring to the start of efforts to create a collective security system in the Gulf and around it. Let’s hope that all interested parties will start discussing ways of reducing tensions and developing neighbourly relations,” the Russian Foreign Minister said.

Examining the media’s role in counter-terrorism

June 3, 2019 bythemorninglk No Comments
While many have openly criticised the positions taken by the media which played a major role in how the events were laid out to the public, as well as shaping public perception of the tragedy