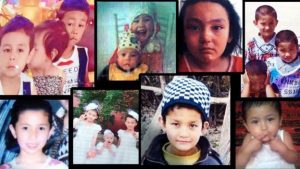 China is deliberately separating Muslim children from their families, faith and language in its far western region of Xinjiang, according to new research.

At the same time as hundreds of thousands of adults are being detained in giant camps, a rapid, large-scale campaign to build boarding schools is under way.

Based on publicly available documents, and backed up by dozens of interviews with family members overseas, the BBC has gathered some of the most comprehensive evidence to date about what is happening to children in the region.

Records show that in one township alone more than 400 children have lost not just one but both parents to some form of internment, either in the camps or in prison.

Formal assessments are carried out to determine whether the children are in need of “centralised care”.

Alongside the efforts to transform the identity of Xinjiang’s adults, the evidence points to a parallel campaign to systematically remove children from their roots.

China’s tight surveillance and control in Xinjiang, where foreign journalists are followed 24 hours a day, make it impossible to gather testimony there. But it can be found in Turkey.

In a large hall in Istanbul, dozens of people queue to tell their stories, many of them clutching photographs of children, all now missing back home in Xinjiang.

“I don’t know who is looking after them,” one mother says, pointing to a picture of her three young daughters, “there is no contact at all.”

Another mother, holding a photo of three sons and a daughter, wipes away her tears. “I heard that they’ve been taken to an orphanage,” she says.

In 60 separate interviews, in wave after wave of anxious, grief-ridden testimony, parents and other relatives give details of the disappearance in Xinjiang of more than 100 children.

They are all Uighurs – members of Xinjiang’s largest, predominantly Muslim ethnic group that has long had ties of language and faith to Turkey. Thousands have come to study or to do business, to visit family, or to escape China’s birth control limits and the increasing religious repression.

But over the past three years, they have found themselves trapped after China began detaining hundreds of thousands of Uighurs and other minorities in giant camps.

The Chinese authorities say the Uighurs are being educated in “vocational training centres” in order to combat violent religious extremism. But evidence shows that many are being detained for simply expressing their faith – praying or wearing a veil – or for having overseas connections to places like Turkey.

For these Uighurs, going back means almost certain detention. Phone contact has been severed – even speaking to relatives overseas is now too dangerous for those in Xinjiang.

With his wife detained back home, one father tells me he fears some of his eight children may now be in the care of the Chinese state.

“I think they’ve been taken to child education camps,” he says.

New research commissioned by the BBC sheds light on what is really happening to these children and many thousands of others.

Dr Adrian Zenz is a German researcher widely credited with exposing the full extent of China’s mass detentions of adult Muslims in Xinjiang. Based on publicly available official documents, his report paints a picture of an unprecedented school expansion drive in Xinjiang.

Campuses have been enlarged, new dormitories built and capacity increased on a massive scale. Significantly, the state has been growing its ability to care full-time for large numbers of children at precisely the same time as it has been building the detention camps.

And it appears to be targeted at precisely the same ethnic groups. BBC

November 13, 2018 byMalik No Comments
American writer and former president of Marvel Comics Stan Lee has died at the age of 95.