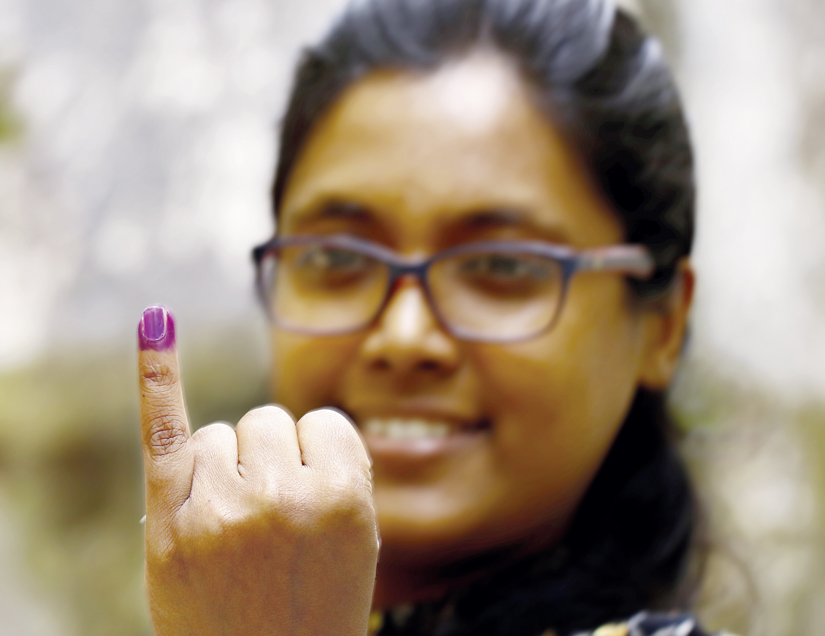 One cannot overstate the importance of voter and civic education during an election year and, in turn, the importance of the initiatives aimed at assisting voters better understand their rights and responsibilities by equipping them with sufficient knowledge on the country’s election process and political system. Our voters need to understand the value of democracy, the impact it has on the country’s system of governance, and how it can be used to address the economic, social, and political challenges facing the island.

It is important to ensure deliberate and targeted voter education, particularly among first-time voters. This plays a significant role in ensuring elections are successful and democratic.

While the youth carry a different perspective to their older counterparts, first-time voters mirror the same diversity shown in the general voting population, and often their interests reflect the shifting tide of generations. 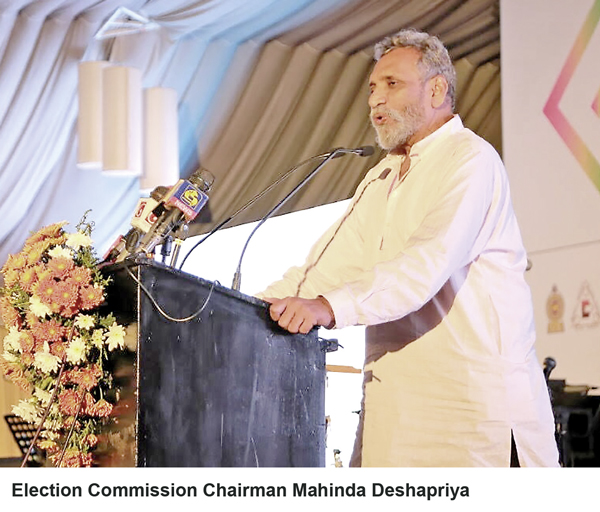 Sri Lankans, young and old alike, seem to be particularly uncertain over who to vote for – or whether to vote at all. The process is already overwhelming for the experienced voter, and first-time voters may suffer further with a lack of knowledge and experience on politics and the voting process in particular – factors that deter young people from participating in elections.

First-time voters are one of the most important groups on election day as they represent the newest wave of voices in the country, making their opinions on the governance of their country known. The youth represent a considerably large group of voters; their votes have the power to enact great change at the polls.

Born of a need to provide effective and comprehensive education on exercising the franchise, the political organisation “My First Vote” partnered with the Election Commission (EC) of Sri Lanka and Facebook to support the Youth First Summit on 8 October in Colombo.

The summit was aimed at educating young Sri Lankans on the importance and process of voting during the upcoming presidential election.

EC Chairman Mahinda Deshapriya attended the event and spoke on the importance of the youth vote and how young people have an opportunity to support their own future and that of the country. Later, in a panel discussion, he also shared about the responsibility which rests within the youth during elections and how they can get involved and make informed decisions. He also encouraged those present to vote and become more engaged in the democratic process. 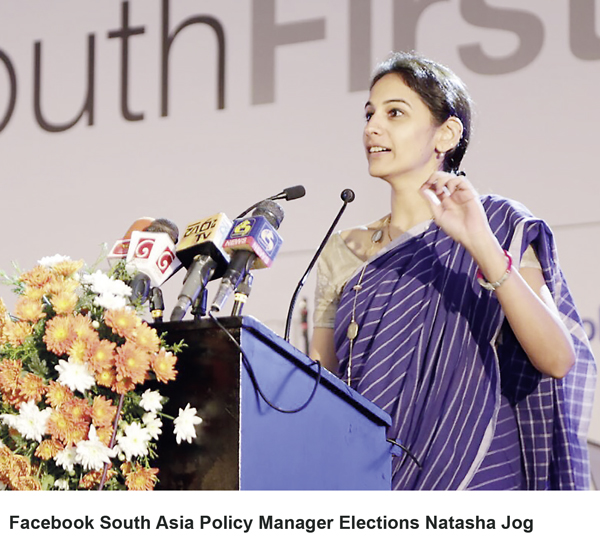 It is important to note Facebook’s participation in the event; the online social media platform being a youth-heavy forum widely used in Sri Lanka and so a rather ideal platform through which to reach the “first-time voters” in a targeted fashion.

He shared that Facebook continues to support programmes in Sri Lanka that aim at promoting digital literacy and economic development. He spoke on recent programmes which have trained up to 20,000 schoolchildren on how to use social media safely as well as training provided to grassroots-level entrepreneurs. He emphasised the importance of partnerships with government organisations, civil society, and local community groups to build an informed community.

Speaking further on Facebook’s involvement in the event and its collaboration with My First Vote, Abeywickrama said: “Facebook was proud to partner with My First Vote and the Election Commission of Sri Lanka to host the Youth First Summit in Colombo. We believe our platform is a valuable source for democracy, can help to encourage healthy debate and provide voters more direct access to their candidates, and give people a voice in the political process.

“We realise that we have a responsibility to keep our platform safe, but we also know that supporting an informed community is essential to this goal. That’s why we’re committed to helping improve the digital literacy of the people in Sri Lanka, to empower them with the skills they need to think critically, and share thoughtfully online.” 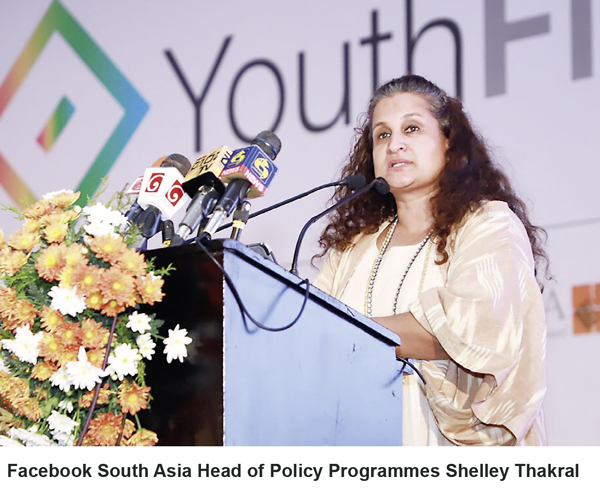 Facebook’s participation in the event also sheds light on the conversation on technology and the future of voting. When the question was posed to Facebook, however, they refused to comment.

For years now digital votes, to the extent of being able to cast your vote via mobile phone, has been debated and considered. On the face of it, voting by phone makes sense as a large percentage of our island’s population own mobile phones and relies on them to execute all sorts of tasks, including secure transactions. And so, using the mobile phone to cast a ballot would seem a natural extension.

Voting from home removes many of the obstacles that discourage people from voting – it provides convenience and access to the electorate without the geographical restrictions.

However, implementing a working system is no simple task.

University of Michigan Computer Science and Engineering Prof. J. Alex Halderman has said: “Securing internet voting in practice will require significant fundamental advances in computer security”, urging that such attempts at mobile voting be held at bay unless major breakthroughs are achieved. 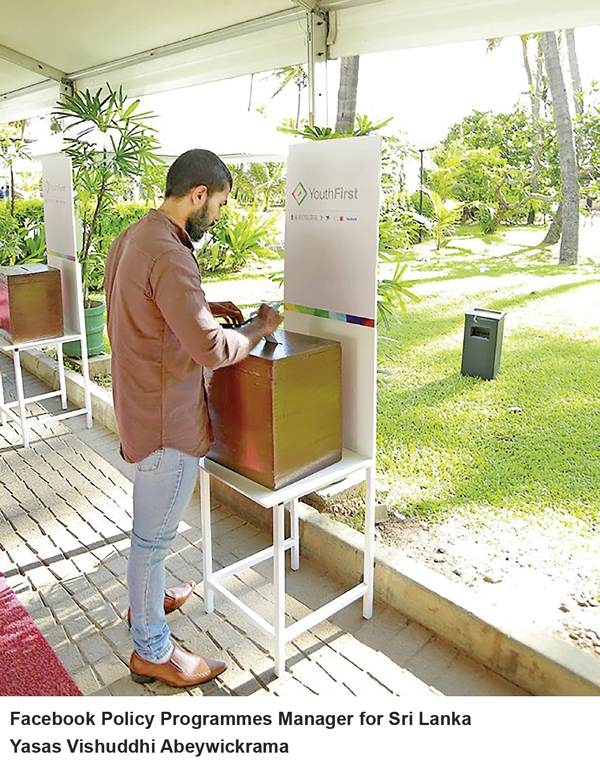 When it comes to voting, you simply can’t yet phone it in. It might be more convenient to cast your ballot through a mobile app, and it probably would mean more voters casting ballots, but there remain reasons to be sceptical as the security risks are obvious.

The Youth First Summit event also featured notable community figures who shared their thoughts on preparing for the election and how the community can use social media to bring positive social change.

Former cricketer Roshan Mahanama, who commented on the importance of discipline during elections, drew from his sports background.

Nalaka Senadeera shared how he uses Facebook to promote the use of abandoned paddy fields for a second round of cultivation and inspires his community for social good.

Social activist Nadeesha Chandrasena spoke on the use of social media in bringing about social change and for development.

Activist Sharanya Sekaram discussed the need to be aware of cyber exploitation and violence, the mechanisms we need to effectively address this, and the potential for social media to create social change.

The My First Vote event also featured an interesting practical exercise, an activity where participants completed a one-page questionnaire to identify the most important issues faced by young people during elections. Participants then put their responses into mock ballot boxes to simulate a real election experience.

The activity prompted those in attendance to take stock of what they are truly dealing with followed by exercising a motion parallel to the action they will carry out during the act of casting a ballot.

Facebook Sri Lanka Policy Programmes Manager Abeywickrama, speaking further on the responsibility of youths in exercising their civil liberties, said: “As young people in Sri Lanka prepare to vote for the first time – an exciting moment in their lives – we hope to offer them the support they need to take part in a healthy and successful political process.

“By supporting My Youth First, we hope to show our deep commitment to the integrity of elections in Sri Lanka. We will continue to work with local organisations, governments, and the community to ensure that this happens.”

Facebook South Asia Policy Manager – Elections Natasha Jog shared this sentiment, adding also that Facebook believes it can be a valuable force for democracy, encouraging healthy debate, providing voters more direct access to their candidates, and giving people a voice in the political process. He finally stressed that it’s imperative for young people to participate as informed civic members of society and encouraged all eligible Sri Lankans to participate in the upcoming election.

November 18, 2018 bythemorninglk No Comments
When one speaks about Crime Scene Investigation (CSI), a knee-jerk response is to muse about popular TV series CSI, which continues to dominate the criminological imaginations of millions of people wo

August 13, 2019 bythemorninglk No Comments
At a glance, insects seem miniscule, and although two-thirds of the animal population comprises invertebrates, 90% of this is ruled by the insect population.