Zimbabwe to host SL for two Tests this month 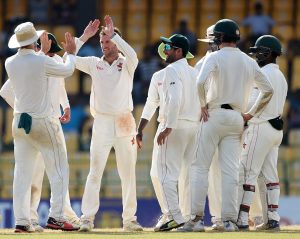 Zimbabwe Cricket on Wednesday, 8 January, announced a two-Test series against Sri Lanka, to be played in Harare later this month, marking a return to the long format for the African nation.

Zimbabwe last played a Test match in November 2018, when they toured Bangladesh for a two-match series, and Coach Lalchand Rajput welcomed the assignment and backed his charges to seize the opportunity.

“We know our home conditions better, our players are getting match-fit and enjoying some game time. So all we have to do is to get in the middle and perform,” he said. “We have not had much game time, so the players will be very keen and eager to seize this opportunity and do well.”

Zimbabwe last played Sri Lanka in a Test match in July 2017, at Colombo’s R. Premadasa Stadium, where the home team prevailed by four wickets, after recording the highest successful chase in Asia.

“Sri Lanka are always a very competitive team who have been playing well and I am looking forward to the Test series,” Rajput said. “For us, it’s a new beginning, a new chapter, and it’s good that we are starting off with the long version which always brings the best out of players.”

Zimbabwe will begin their preparations for the series with a ten-day training camp that starts tomorrow, featuring the top performers from the Logan Cup, the domestic first-class competition. “It’s important to have players performing well in first-class cricket and I am happy that in the Logan Cup we have players who have scored centuries and taken five wickets and more.

“This bodes well for our preparations and it’s always good to have players who are match-fit and in good nick. During our 10-day camp, we will attend to a few issues, including the processes, as we fine-tune our team ahead of the series.”

The announcement comes one day after the governing body named Sean Williams the new Test captain, and Chamu Chibhabha the limited-overs captain on an “interim basis”, following the retirement in September 2019 of former captain Hamilton Masakadza, who subsequently became the director of cricket.

January 9, 2019 byRevatha No Comments
ICC has given a two-weeks amnesty for Sri Lankan cricketers and officials to reveal any cricket-related corruption approaches, Sports Ministry sources reported on Wednesday, 9 January.