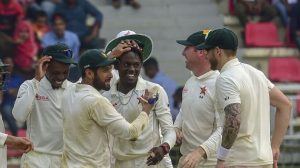 Brandon Mavuta celebrates a wicket with his teammates

The moment arrived at 1.46pm on the fourth afternoon in Sylhet. Ariful Haque swung hard at Wellington Masakadza, but suffered a fate that most Bangladesh batsmen have off late, his top-edge being caught by a jubilant Regis Chakabva. Zimbabwe fought odds that were stacked against them, but won most sessions in the game with patient batting and bowling. They held their catches too, and dismantled Bangladesh for a 151-run win.

It is only their third overseas Test win and first since November 2001, when the world of cricket was considerably different. That win in 2001 also came against Bangladesh, when Zimbabwe won by eight wickets in Chittagong under Stuart Carlisle.

Brandon Mavuta, Sikandar Raza, Kyle Jarvis and Wellington combined brilliantly to bowl Bangladesh out for 169 in the second innings. Mavuta was introduced late in the first session, but ended with four wickets, three of which came after lunch. His 4 for 21 were the third-best innings figures by a Zimbabwe bowler on debut. But it was Raza who broke Bangladesh’s back by removing Imrul Kayes, Liton Das and Mahmudullah at a crucial time. Wellington finished with two wickets while Jarvis took one.

Bangladesh had gone into lunch reeling on 111 for 5, having just lost captain Mahmudullah caught at square leg attempting a sweep, and Nazmul Hossain Shanto, who timed a rank long hop to Raza at cover.

Mushfiqur Rahim was the first wicket to fall after the lunch break, when he swept Mavuta down deep-backward square leg’s throat. Wellington took a great catch diving forward, but the choice of the shot remained baffling. Soon, Mehidy Hasan and Taijul Islam fell within six balls of each other, getting caught behind and holing out to long-on respectively.

Mavuta, who had removed Mehidy, then took the wicket of Nazmul Islam to complete his fourth wicket before Ariful fell for a 37-ball 38 to end Bangladesh’s innings in 63.1 overs.

At the start of the day, there was some hope for Bangladesh when Imrul and Liton put on 56 for the opening wicket, the first half-century opening stand for Bangladeshi since January this year. But Imrul, who came into the Test having made 349 runs in the ODI series and had worked hard to reach 43 off 102 balls in this innings, missed a sweep off Raza to be bowled around his legs.

Raza had also taken the first wicket of the Bangladesh innings, trapping Liton lbw even though umpire Richard Kettleborough had initially given him not out. But upon review, the spinning delivery was seen hitting middle stump. While the openers did share a crucial stand, the pair survived three chances in total. Brendan Taylor dropped Imrul at first slip while Brian Chari couldn’t reach two chances at short leg, once off each batsman in the 15th over.

Mominu Haquel’s woeful Test run continued after he was dismissed for 9, which included two well-struck fours. Jarvis tested Mominul outside the off stump and it was this interplay that brought about his downfall. After beating his tentative push with a delivery that held its line, Jarvis followed it with another that was leaving the batsman, but a weak push took the inside edge and thudded into the stumps.

November 12, 2018 byRevatha No Comments
A three-member special committee to call nominations and hold SLC elections in due course.

Runs tied in Super Over too, yet Colombo beat Kandy on no. of fours

August 22, 2018 byRevatha No Comments
A nail-biter saw Colombo beat Kandy after the Super Over also ends up in a tie