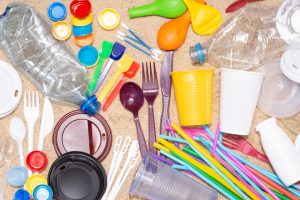 Following the recent proposal by the Central Environmental Authority (CEA) to ban the use of single-use plastic from 2021, major plastic users in the corporate sector are set to phase out single-use plastics and regulate other types of plastics.

Speaking to The Sunday Morning Business, industry leaders in the fast-moving consumer goods (FMCG) sector stated that they are supportive of the proposal and will be working towards this same goal, despite the obvious impact on their current business practices.

He suggested that if the Government was going to regulate the use of PET (polyethylene terephthalate) bottles used for soft drink packaging, they should bring in the Extended Producer Responsibility (EPR) strategy which places the responsibility of a product’s post-consumer phase on the producers. He explained that since PETs are recyclable, they should not be banned and instead can be very resourceful.

“Coca-Cola’s most dominant packaging material is PET, and it is 100% recyclable. We do not think substances such as PET should be banned because they come with numerous benefits including transport, safety, and hygiene.”

Madurasinghe stated that PETs should be managed properly where even citizens who contribute to pollution are held responsible, and all the sectors from private, civil society, media, and government come together to collect and recycle PETs. He went on to state that these recycled PETs can be used to make yarns and brushes, which are currently being exported to over 19 countries around the world, bringing in export revenue to the country as well as livelihood opportunities to both the formal and informal sectors.

“You can look at banning things like plastic straws, cotton buds, and plastic cutlery, but PET is a resourceful item, as long as it’s managed. Today, around 20-25% PET in Sri Lanka is being recycled.”

He stated that single-use plastics are detrimental to the environment and by nature non-recyclable. Therefore, they should be looked at more closely. However, he explained that companies need to be given time to phase the material out and find alternatives, or the Government should propose an alternative.

Daminda Gamlath, the Head of Beverages at Ceylon Cold Stores PLC (CCS), a subsidiary of John Keells Holdings PLC (JKH) which deals with brands like Elephant House, shared a similar sentiment and stated that the company is already in the process of reducing their plastic usage and getting into an EPR system. He explained that the company has already come up with an alternative for its plastic ice cream cups but are yet to find one for their plastic spoons.

“We are committed to reduce our plastic usage, but then, that has to be done in a way the industry is protected and the consumers are protectors.”

He stated that while most of the initiatives in the proposal are agreeable, there are some they want to discuss with the CEA, including alternatives and a timeframe for implementation.

Other companies that are also impacted by this proposal, such as the local bottled drinking water producer Aquafresh, also stated that they are currently in the process of looking into other alternatives for their plastic bottles. Access Group Sri Lanka Brand Development and Promotions Executive Kasun Ranatunga stated that while no permanent solutions have been found, their research team is working on finding a better solution.

“We will definitely have to adapt to this situation or miss out on the opportunity. Therefore, we are currently testing out several other alternatives and hope to come out with some good news in the coming months.”

The proposal that is set to be submitted to the Cabinet of Ministers is looking to ban single-use plastic items from 2021. This proposal will focus specifically on banning the use of sachet packets containing shampoo and hair gel, plastic straws, and plastic water bottles due to the extensive damage caused to the environment by such products.

CEA Director General Hemantha Jayasinghe said the use of small plastic bottles containing soft drinks is also to be regulated under the proposal. Furthermore, the CEA is also considering possible alternatives for plastic yoghurt spoons and plastic clips used in the packaging of shirts.

Over 47k tourists in July despite chaos

August 12, 2022 byNews Admin No Comments
Sri Lanka received 47,293 tourists during the month of July this year despite the prevailing economic crisis, as per the Sri Lanka Tourism Development Authority (SLTDA) monthly report.