20A: No referendum, only two-thirds

September 1, 2020 by Sarah Hannan No Comments 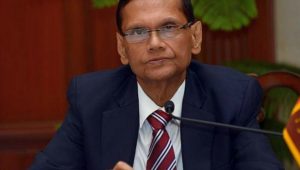 The draft proposal of the 20th Amendment to the Constitution that would be tabled at the Cabinet tomorrow (2) will only require a two-thirds vote, Sri Lanka Podujana Peramuna (SLPP) Chairman and Minister of Education Prof. G.L. Peiris said at a press briefing yesterday (31 August).

Moreover, the SLPP Government’s main goal is to iron out the clauses that are being continuously misinterpreted and have given rise to the downfall of the country’s governance structure.

“We believe that this amendment will fortify the powers of the first citizen of this country, i.e. the President who was appointed by a majority vote. We would like to reiterate that at no point will we as a Government look at extending the office term of the President or the term of the incumbent Government.”

Prof. Peiris also confirmed that the new Constitution will not remove the independent commissions, but will draft in clauses that would ensure that the members who are appointed would function as truly independent officers of the State, who will not be biased in their contributions to the commissions that they serve.

February 11, 2021 byMihi Perera No Comments
Government Medical Officers' Association (GMOA) said today that the COVID-19 death rate in Sri Lanka has increased to 17 per one million of the people.

China and India in a “scholarship war” in Sri Lanka

August 8, 2018 byThe Sunday Morning No Comments
China and India are virtually competing against each other, not just with infrastructure projects in Sri Lanka, but now with scholarships.....