Chief Opposition Whip Lakshman Kiriella has requested the Speaker of Parliament to postpone the debate on the 20th Amendment to the Constitution scheduled to take place this week. 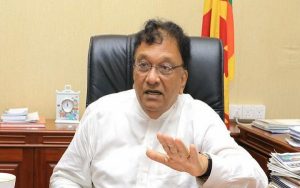 In a letter addressed to Speaker Mahinda Yapa Abeywardena, Samagi Jana Balawegaya (SJB) MP Kiriella has claimed that Covid-19-infected persons have been reported from nearly every district in the country and that negligence on the part of the Government has led to it becoming a pandemic.

He charged that on several occasions since 22 April, the Government had declared that the Covid-19 threat had ended, pointing out that this, however, had not happened.

Kiriella also alleged that the Government has been late in introducing laws and regulations to help control the virus by around 10 months, whereas other countries across the globe had presented these regulations by May.

The Chief Opposition Whip stated that albeit somewhat delayed, several regulations have been gazetted and if they are to be followed, gatherings cannot be held and social distancing must be maintained.

Therefore, he alleged that the seating of MPs in the chamber contradicts the very same regulations introduced by the Government, while the continuation of parliamentary sittings also violate the regulations at a time when gatherings have been limited.

Therefore, Kiriella, in his letter, has requested the Speaker to take necessary steps to postpone the debate on the 20th Amendment to the Constitution scheduled for this week.

He has also requested to provide an opportunity to discuss this matter by convening Parliament this week under the new regulations introduced by the Government.

May 9, 2021 byNews Admin No Comments
The State Pharmaceuticals Corporation (SPC) is to receive the purchasing agreement for the delivery of 5.8 million doses of the Pfizer-BioNTech Covid-19 vaccine from Pfizer Inc. tomorrow (10), The Sun

Health-related investments must be made through primary healthcare system: Community physician

March 1, 2022 byNews Admin No Comments
Necessary investments on health should be done through the primary healthcare system so as to improve health indicators and the human capital.