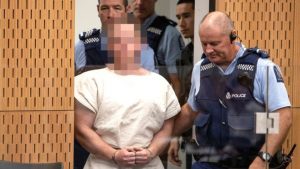 The main suspect in the mosque shootings that killed 49 people in New Zealand on Friday has appeared in court on a single murder charge.

Australian Brenton Tarrant, 28, appeared in the dock in a white prison shirt and handcuffs. Further charges are expected to be made against him.

Two others are in custody. None of those detained had a criminal record.

Tarrant was remanded in custody without plea and is due appear in court again on 5 April.

Speaking at a news conference on Saturday, Ardern said that the guns used by the attacker appeared to have been modified, and that the suspect’s car was full of weapons, suggesting “his intention to continue with his attack”.

The prime minister also spoke about the importance of reuniting relatives with their loved ones “as quickly as possible”, and said that bodies were still being removed from the Al Noor mosque – the site of the first attack.

She added that financial support would be made available to those who had lost someone on whom they were financially dependent.

The first victim of Friday’s attack has been named by his family as Daoud Nabi, 71, who moved to New Zealand from Afghanistan in the 1980s.

The identities of the other victims have not yet been released.

A total of 48 people were wounded in the shootings. Among those injured are two young boys – aged two and 13. Eleven of those being treated at Christchurch Hospital are in a critical condition in intensive care, chief of surgery Greg Robertson said.

Bangladesh, India and Indonesia all say some of their citizens were killed in the shooting and others are unaccounted for.

On Saturday, Christchurch Mayor Lianne Dalziel expressed “revulsion” at this “act of terrorism” and voiced solidarity with the victims.

“We have welcomed new people into our city. They are our friends, they are our neighbours,” she told reporters. “We want to come together to support them.”

She added that flags would fly at half-mast on government buildings in the city “until further notice”.

Security remains tight across Christchurch. All mosques in New Zealand have been closed. (BBC)

November 9, 2018 byMalik No Comments
There has been a remarkable global decline in the number of children women are having, say researchers.