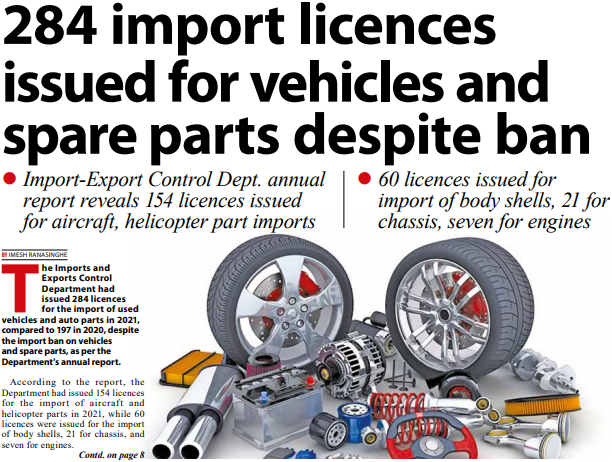 The Imports and Exports Control Department had issued 284 licenses for the import of used vehicles and auto parts in 2021, compared to 197 in 2020, despite the import ban on vehicles and spare parts, as per the Department’s annual report.

“The number of licenses issued by this unit in 2020 has come down drastically due to the regulation for suspending the import of vehicles and spare parts in order to reduce the pressure on the exchange rate and to boost the local industry in the face of the global pandemic of Covid-19. However, licenses were issued in 2021 to import raw materials for the development of the local vehicle assembly industry and as a result, more licenses were issued in 2021 compared to 2020,” the annual report said regarding the reason for the increase in the licenses.

However, the import licenses issued also included six licenses to import used motorcycles, three licenses for heavy vehicles, one license for vehicles imported by embassies, and another license for the Import made by officers in foreign missions.

The Department has issued 19,576 overall import licenses, out of which 8,982 licenses are issued for mobile phones and telecommunication equipment.

The main factor influencing this, according to the Department, was the increase in the number of mobile phone imports, which went up by 85% compared to 2020.

In addition, the number of other communication devices imports increased by 45%. In the wake of the Covid-19 pandemic, the school and university system adapted to an online education system, which led to high demand for mobile phones and communication equipment and increased imports to meet the demand.

September 12, 2021 byNews Admin No Comments
Although Covid-19 may be gender-blind, it has created a crisis that has disproportionately affected women across the globe. The economic impact of the pandemic is mostly channelled through the labour

A sportsman’s advice for the ports game

March 7, 2021 byNews Admin No Comments
I was of the opinion that rugby was always a big boys’ game, till I met Sudath Sampath, the legendary former Sri Lankan rugby Captain who was fondly known as “Little Serevi” (Waisale Serevi is a Fijia