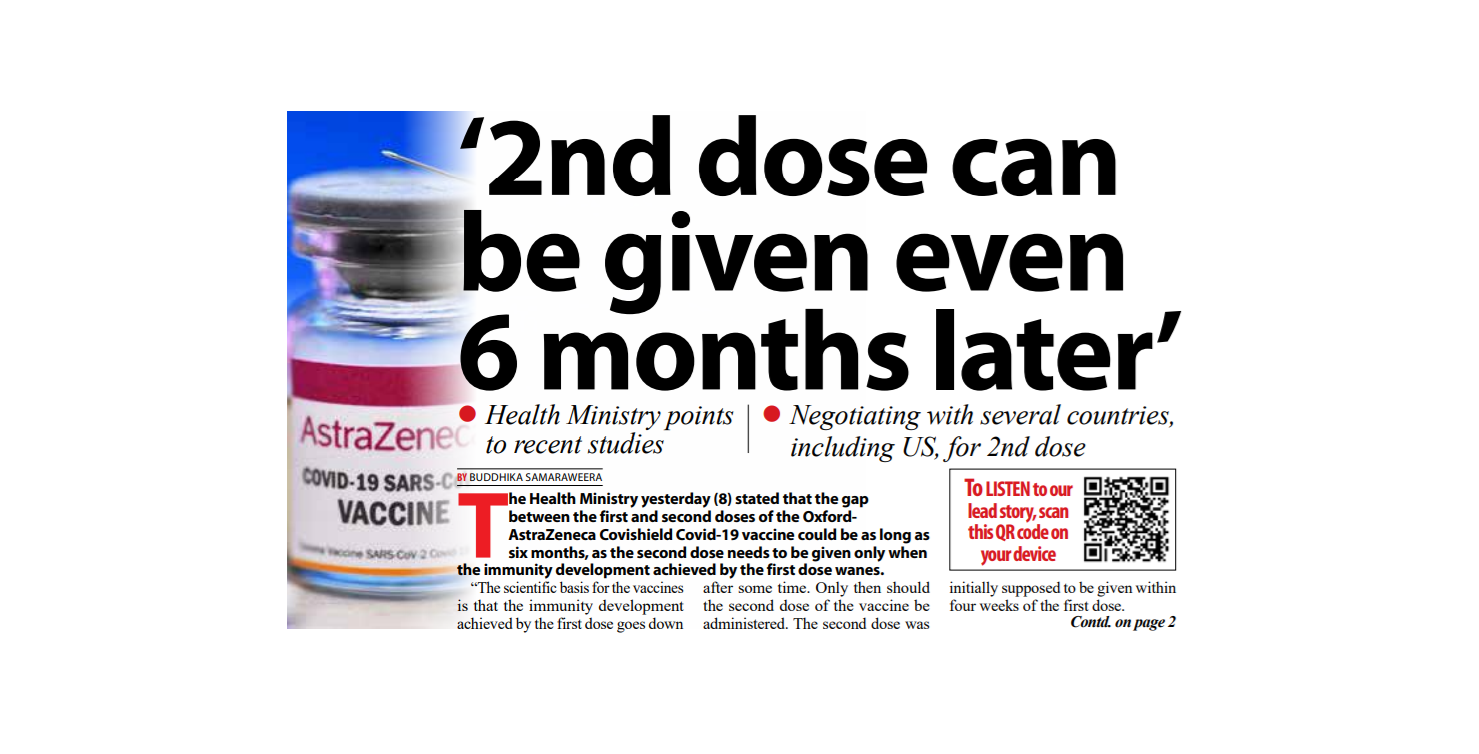 ‘2nd dose can be given even 6 months later’

The Health Ministry yesterday (8) stated that the gap between the first and second doses of the Oxford-AstraZeneca Covishield Covid-19 vaccine could be as long as six months, as the second dose needs to be given only when the immunity development achieved by the first dose wanes.

“The scientific basis for the vaccines is that the immunity development achieved by the first dose goes down after some time. Only then should the second dose of the vaccine be administered. The second dose was initially supposed to be given within four weeks of the first dose. However, subsequent studies showed that the immunity achieved by the first dose is not reduced until three or four months. From time to time, new findings are made about each vaccine through research conducted by various institutions. Now, recent studies have shown that the second dose of the Covishield vaccine could be given six months after the first dose is administered,” Health Ministry Communications Director and Disaster Preparedness and Response Division Head and Public Health Services Deputy Director General Dr. Hemantha Herath told The Morning.

Dr. Herath was responding to our queries about whether it is possible to achieve the desired results of the second dose of the Oxford-AstraZeneca Covishield vaccine now after nearly four-and-a-half months have passed since the first dose was administered.
However, he said that “it is best” to give the second dose “as soon as possible”.

Dr. Herath also noted that no country had been able to conduct lengthy studies on the vaccines during the early days owing to the rapid spread of the Covid-19 pandemic.

Sri Lanka, late last January, began administering the Covishield vaccine after receiving 500,000 doses from India as a donation. Frontline workers were among those who received the vaccine first and the inoculation of the second dose of the vaccine commenced last April. However, the inoculation programme was affected as the Serum Institute of India (SII) suspended the vaccine’s export supply, due to the rapid spread of Covid-19 in India.

In the meantime, sources at the Ministry of Health told The Morning that negotiations are underway with several countries, including the US, to bring down stocks of the Covishield vaccine manufactured by the SII to administer the second dose to Sri Lankans who received the first dose. However, according to the sources, there is no certainty as to when the stocks will be available in Sri Lanka and also with regard to the number of doses.

Several attempts to contact State Minister of Production, Supply, and Regulation of Pharmaceuticals Prof. Channa Jayasumana and State Pharmaceuticals Corporation Chairman Dr. Prasanna Gunasena to inquire about the matter, were unsuccessful.
Meanwhile, when contacted by The Morning, State Minister of Primary Health Care, Epidemics, and Covid Disease Control Dr. Sudarshini Fernandopulle also said that discussions are underway with many countries to obtain the second dose of the Covishield vaccine.

July 14, 2019 bythemorninglk No Comments
United National Party (UNP) backbenchers in Parliament are preparing to bring an impeachment motion against President Maithripala Sirisena at the next parliamentary session.

Food safety and consumer rights: Are we eating our way to an early grave?

April 9, 2021 byNews Admin No Comments
Sri Lanka has a culture that puts food at a higher position and Sri Lanka is known as a nation that is sensitive towards another’s hunger. Needless to say, Sri Lanka’s culture also takes pride in its

2nd dose can be given even 6 months later