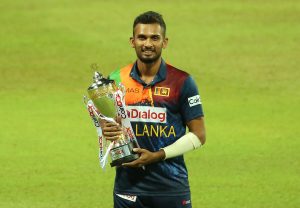 After a thrilling win in the last T20I on Wednesday, the day before, it was another example of what a win can do to bring about a change in a struggling team on Thursday here at R. Premadasa International Stadium in Colombo.

For the first time in many years, Lankan fans were treated with fighting attitude and energy in the field by a Sri Lanka team.

Wanindu Hasaranga proved yet again why he is one of the top bowlers in the world. In the field, Sri Lankans showcased what was lacking for many years. It was probably one of the most inexperienced Indian teams to play at the international level and there are still unresolved issues in the Sri Lankan front, but this win could be the steppingstone on which Sri Lanka can build on, to become great, once again.

Electric in the field

The visitors were forced to do another change after Navdeep Saini’s injury in the previous game. With the eight players of their squad in isolation, they had to resort to one of the net bowlers in Sandeep Warrier, a lanky seamer from Kerala.

Sri Lanka got off to an ideal start with the big scalp of Shikhar Dhawan who was caught at wide slip off Dushmantha Chameera’s bowling. It all went downhill from there for the visitors, who lost four wickets inside the power-play.

Sri Lankans were electric in the field  as Nissanka effected a run-out after Devdutt Padikkal was struck in the pads. It initially looked a run-out but later turned out to be an ‘lbw’ after replays showed that umpire Kumar Dharmasena was lifting his finger. Umpire’s decision stood and it got Ramesh Mendis, his maiden wicket in T20I.

Skipper Dasun Shanaka brought in birthday boy Hasaranga and the world no. 2-ranked T20 bowler produced a brilliant opening over, getting rid of Sanju Samson and Ruturaj Gaikwad to put India reeling at 29/4. He went on to take two more wickets at the end to reach his best figures in T20Is. India’s lack of batting power was exposed and the Lankan spinners tightened the screws in the middle overs.

Shanaka led from the front with the ball in hand and in the field too, with two acrobatic one-handed grabs: first, off his own bowling to get rid of Nitish Rana and the other to get rid of Bhuvneshwar Kumar off Hasaranga.

The Sri Lankan fielding excelled right through when Chamika Karunaratne pulled off a juggling catch at mid-wicket to get rid of Varun Chakaravarthy. India were restricted to their third lowest total of 81 in T20Is.

Win after some stutters

The reply was cautious at the start and once the spinners came into the attack, Sri Lanka’s batting weakness was highlighted yet again.

Indians would have preferred the likes of Yuzvendra Chahal but they had to settle for ‘an off-colour’ Kuldeep Yadav, and the inexperienced Rahul Chahar and Chakaravarthy.

Just like in the previous T20I, Chahar was causing all sorts of problems as he got rid of Avishka Fernando, Minod Bhanuka, and Sadeera Samarawickrama. However, after some stutters, Dhanajaya De Silva and Hasaranga cantered home with 33 balls to spare. 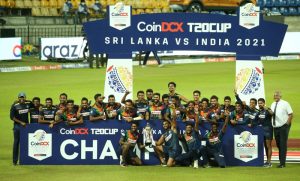 A rejuvenated Sri Lanka white-ball team with the series trophy on Thursday (29) at the R. Premadasa International Stadium in Colombo

Kuldeep Yadav not out 23

Chetan Sakariya not out 5

Did not bat: Sandeep Warrier

Dhananjaya De Silva not out 23

Wanindu Hasaranga not out 14